Today I am mostly...

Planting a hedge and learning the Dead Man's Hand rules for tomorrows Conwy Wargames Club game. The other games will be WW2 naval and possibly a Napoleonic one.

I've played the rules once getting in 2 games and they were great fun. Dave is the game host and has been busy building 4Ground buildings. I'm looking forward to it.
Posted by Grigork at 09:18 1 comment:

I started off pulling all the ships out and putting the unmade ones together then sorted all the cards out. Looking at the points values I decided that 300 points a side would look right and would suit 4 players. I always try to get a game to cope with 4 players as I don't always know who will want to play on the day.

Originally I set up the forces on a 3ft by 3ft map but it didn't look right and checking the rules I realised I could use 4ft by 3ft and that was much better. 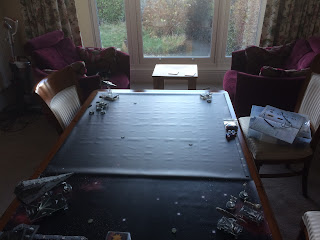 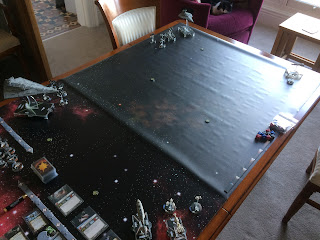 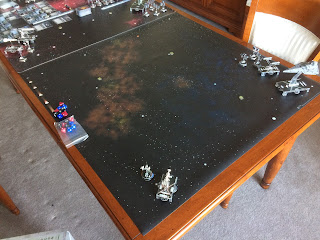 The Imperial force cards etc is the first 2 rows and the Rebels the top 2: 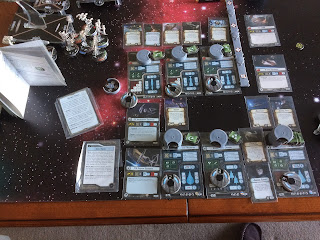 I wanted a force people would recognise so for the forces I picked are:

I chose the 'Intel sweep' mission. I split both forces  placing units in each corner angled so that they could intercept in the centre of the board. I then placed the objectives which undid this strategy - not on purpose. I didn't reset the forces as this was a solo game to remind of the rules so that I'd ensure a smooth game at the club. 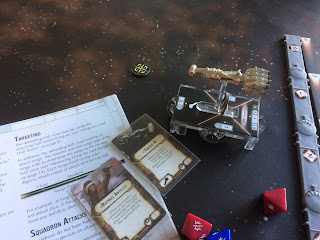 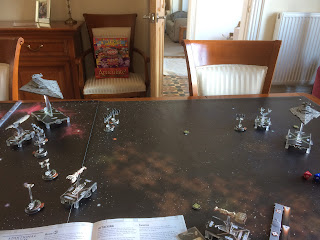 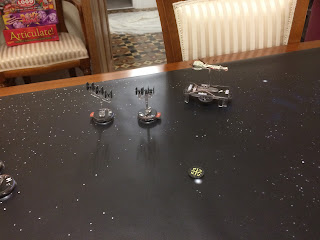 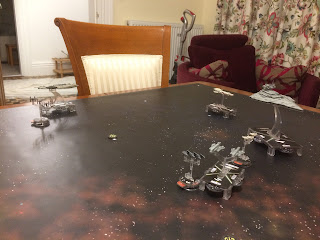 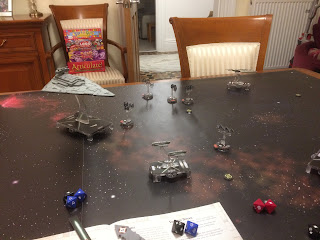 It was a fun game, but it did feel one sided. I did learn that if I had a Corvette and the Scout Frigate firing on the Imperial Class Star Destroyer I could have taken it out with the right dice, disabusing me of its invulnerability. On the other hand a Star Destroyer with the right dice can destroy a Corvette in one go, which hurts with small forces. I like the way the rules worked and they made the game exciting, and the objective token changed how I played.

(The quick witted will notice this is getting published in March, which indicates how slow I am getting these out. I started writing this before the Jan game and kept the same present tense to avoid rewriting it. Assuming I haven't used past and present - which does happen!)

When I found the roughly 1/76 animals I also found this bad boy. He's probably a bit big to be a realistic size alongside 28mm figures but he or she is the right size in my imagination for a terrifying dinosaur. The paint job is great. The only drawback is the front is top heavy so the model will not stand but I can sort that with a base. B&M bargains did a triceratops and stegosaurus as well, but I resisted. 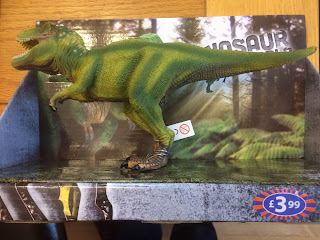 Animals to use in 20mm games

I spotted these in B&M Bargains and they look almost 1/76 scale, ideal to roam the boards of Asia and Africa with stalwart 20mm figures. I resisted buying some and recommended them to a chum for his modern games mainly set in Africa. 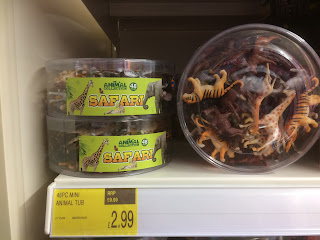 Dave hosted a ACW game uisng his 15mm collection and the Black Powder rules supplement 'Glory Hallelujah' . Both sides had a couple of brigades and the main purpose of the game was to see how the new rules worked.

For the club game in February meeting I put on a game using 2 casts I hadn't used before The Beat and Crime. I also used the Double Agent character from the Shiva pack, because she looked fun.
Episode 1 'The Trumpton Job' saw a hastily organised stake out grabbing officers from where ever to try and catch the gang in the act. Our hero's didn't know where on Trumpton's high street the gang were going to strike.
The tough detective in charge (Gaz) placed 2 under cover PC's on the street while everyone else waited in the car or the van. The PC disguised as a security guard hid behind a roof top sign and the the other PC strolled the street.
Action started after a loud bang and shop alarms going off all over the place. 2 passed mind scores saw the beat focusing on the electrical store and the bank.
Inside the electrical store the underworld boss Elvis (controled by Tony), his code named for the job, regretted the fact Black and Decker hadn't been available as his examined the lack of wall between the bank and store. Boom Brenda the explosives expert on the other hand was enjoying herself.
Having the initiative Elvis's faithful lackey Ardama pushed the kidnapped bank manager towards his office. Elvis and Brenda followed. The Dai brothers headed for the roof of the store. Since there were no obvious stairs mind tests were needed to get up there. Luckily the brothers were led by Daivina and scrambled up.
Biggles, Algy ,and Ginger went to the front of the store realised the roof would be a better vantage point and headed there. The rest of the episode is told in pictures... 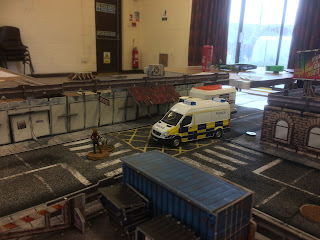 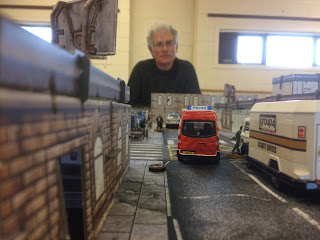 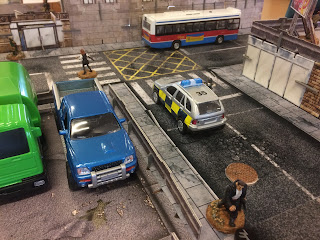 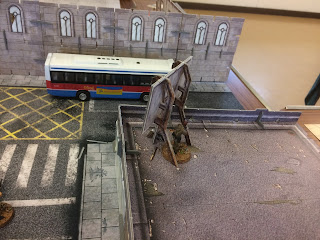 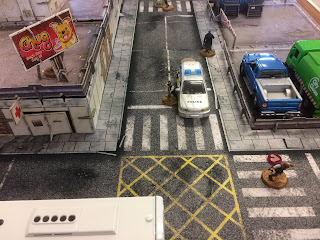