Ian hosted a DBA game. I confess I am a great fan of Hail Caesar and before that Tactica, when DBA came out I took a dislike to it because it looked like chess and DBM didn't win me over. Now both these views of DBA and DBM were purely based on seeing games at shows, reading the multitude of articles that came out in the magazines at the time, but never playing them.

Since Ian has joined the club he's done a couple of games and the players have really enjoyed them, especially the DBM game. I realised there is no point being snobby  about a set of rules if you've never played them so in March I gave DBA a go.

Ian hosted providing a Roman and Sassanid army and Pete brought along an Alan army that could be adjusted to represent Visigoth. 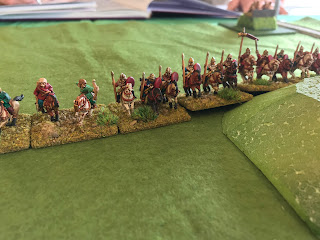 I won the game, and really enjoyed it. I found some of he mechanisms familiar from Hail Caesar, and my mind adjusted too the small unit size quickly and I felt I was playing a real wargame and not chess. I enjoyed the tactical challenge, helped by not being familiar with the rules.

Games 2
Pete took over as umpire and Ian played the Sassanids and I took over the Alans. Sadly I took no photos, but it proved another enjoyable game. I used my speed to take the terrain and we clashed almost simultaneously as both our single lines met. I was able to exploit a gap created partly by Ian's lack of pips and partly by my winning a combat to get my cavalry behind Ian's line. This was exciting but it wasn't all going my way and we both were down to losing 1 more unit and we'd lose. This time it was me, done for by an elephant I was assured my horse archers could take, but rolling 1's is not going to help.

Another great game. I still love Hail Caesar but I'd definitely play DBA again.
Posted by Grigork at 07:00 1 comment: