This game was born from a combination of things. First I'd just finished painting the Doctor and his companions, and second the youngest nephew requested a game set in history, with cowboys maybe futurist. Well then I said ......


Doctor Who - Once Upon a Time in the West

Synopsis
The Angels have set up a farming system to sustain their need to feed off time displacement. They take people from 2013 and transplant them in a remote mining community in the American old west circa 1880. The Doctor has picked up the distortion in time and has tracked the Angels back to 1880 and set off to investigate and rescue the unfortunate victims.

The Good
The Doctor, Amy and Rory

The Ugly
Perhaps a bit harsh, but ...
The Sheriff, 2 deputies and 6 posse. Armed.
10 towns folk displaced in time.
6 miners from 1880 heading to town in a wagon to seek their fortune.

I used the statistics in the Doctor Who rules published free by Crooked Dice. I used the Pirate Captain as the Sheriff but the gun rules for pistol, and the pirate stats for the Deputies and Posse, again using the relevant rule for whatever they were armed with.

I could have used the displaced in time ruled from 7TV but I thought that would slow things down.

4 x 4 board, although I dressed a 6x4 board the play area was restricted to a 4x4 section. The action takes place in a town with a main street and square with sides streets running off it. 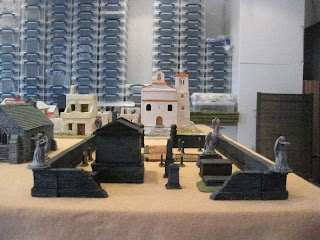 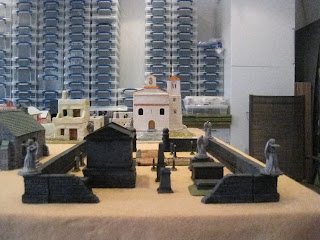 
Initiative is determined as normal in all turns


Special Rules
The coach with the miners from the 1880s begins moving and will arrive at the beacon D3 once half the townsfolk are safe in the Tardis or when the night shift Angels are down to half strength.

The Angels have set up a beacon in the town square to enable them to always return to the right place either with food or collect new food.

Destroy the beacon by the Doctor passing an intelligence test while in base to base contact with beacon.

Rory has a Laser blaster in addition to his Last Centurion stats.

Only the Sheriff, Deputies and Posse can use guns.

The Doctor. Amy and Rory need to convince people to escape in  the Tardis. This requires an intelligence test.

When the Sheriff is convinced his Deputies will follow. The Deputies or Sheriff need to convince 1 of the posse for all of them to be convinced. They will all now follow the Sheriff either to fight Angels or seek out towns folk and convince them to head for the Tardis.

The Doctor, Amy or Rory need to be at the Tardis door to let towns folk in.

I umpired while the eldest nephew took on the role of the Angels, and the youngest commanded the Doctor and companions.

Turn 1
The Doctor won the initiative and everyone trotted off to chat to the man in charge of the town, the Sheriff.

Using the Angel rules a dummy token and a token representing the real Angel  were deployed and moved on the board. The Angels opted to spread out throughout the town so that they could react to whatever these strangers may do. 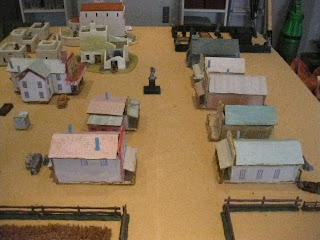 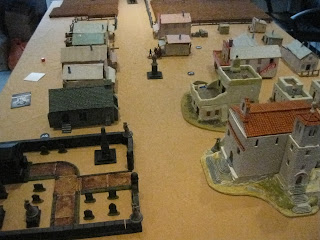 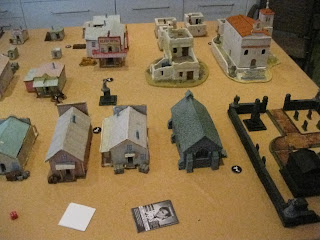 Turn 2
The Doctor dusted himself off and walked in to the Sheriffs office and explained his plan to rescue everyone. A successful opposed intelligence test later and the Sheriff and his Deputies were activated and all 3 sprinted across to the saloon to round up a posse. The Deputies stayed outside facing possible threats and trying their best not to blink.

Amy and Rory headed off in the opposite direction to the Sheriff moving towards the rear of the jail. Both facing different directions eyes staring for any threat.

The Angels moved closer to this disturbance in their town. One attacked Amy. Tension was high could this be the first blow against the Doctor's plan. Bad luck for the Angels the attacking token turned out to be a dummy.  It's seems this method of concealing movement works for both sides! 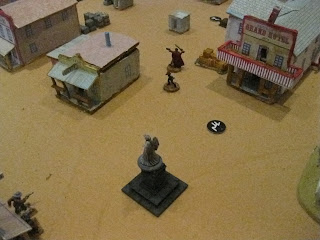 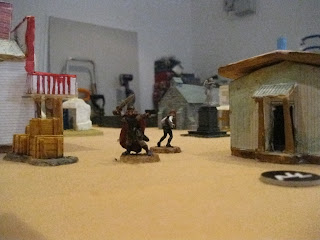 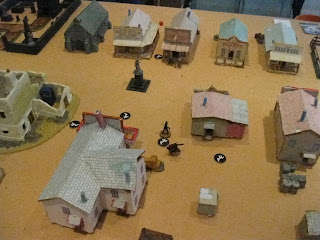 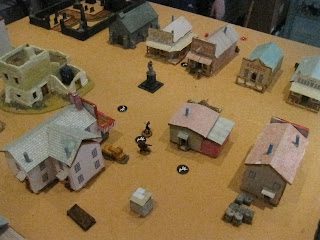 Turn 3
The first Angels are revealed as they come in to line of sight of the Deputies and Amy. The Doctor plays an event card and the Angel that had moved to block the escape to the Tardis is turned in to member of the towns folk.

The Sheriff declares he's going to focus on taking out Angels rather than saving the towns folk. While he convinces the Posse the Deputies move to see the approaching Angel creeping up on the Saloon and open fire causing it to flee (removed from game). Only 6 more Angels to go.

Rory fires his Laser pistol at Angel moving up to attack and obliterates it. He uses his next action to move after Amy who decides to check the building next to the saloon for towns folk. The Doctor races to the next building along from Amy's. At last a systematic search of the town begins.

The Angels are now down to 5. Surprisingly they become more cautious, helped by the fact they majority are on the other side of  town away from the gun totting Sheriff and his Posse. 1 Angel enters the second saloon next to the small Methodist church getting ready to spirit the owner away. A 2nd moves up to support. 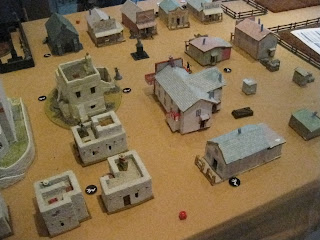 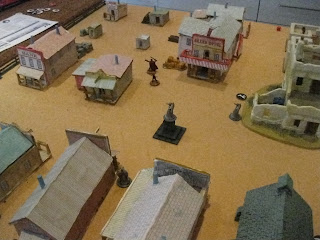 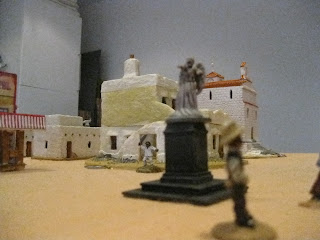 Turn 4
The Doctor still holding the initiative convinces his stall holder to flee to the Tardis. The peon who'd replaced an Angel gets the drift of what's going on and tries to get in to the Tardis. Rory realizes the problem and heads to the Tardis to open the door.

The Angel in the second saloon is gunned down by a Deputy, and some of the Posse take care of it's partner closing in on the back door. The Angels are now down to 3. The dice is rolled for the second shift and the miners' wagon. They will arrive on turn 7.

Amy fails to convince her store holder that she can get him safely home in the Tardis.

More of the Posse pour out of the saloon and cross the square spotting another two Angels heading for the Tardis, and end their attempt in a hail of bullets. The Angels are now down to 1.

In the Angels turn the last one launches an attack on Rory and fails. 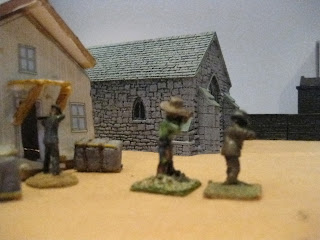 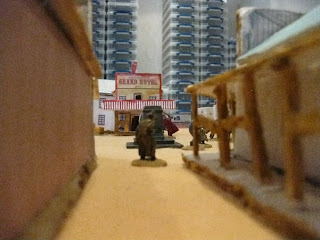 Turn 5
The Angels gain the initiative and fail to kill Rory, who turns and blasts it to smithereens.

The Sheriff heads for the Hotel to convince the occupants to flee. He discovers on a D6 that they are scattered within the building. Amy convinces her stall holder to move. The Doctor enters the bakery and discovers it's empty. 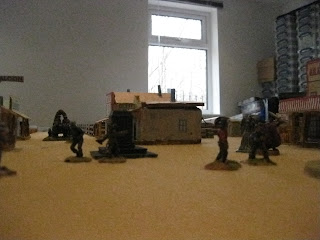 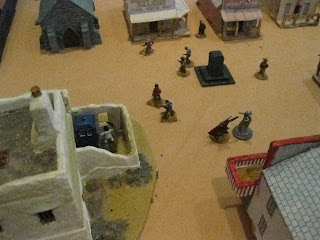 Turn 6
The Sheriff convinces the receptionist of the hotel and moves on to find the guests. Half the posse gathers around the square and the rest head into the Mexican part of town looking for fellow townsfolk.

Rory opens the Tardis and Juan is the first to safety, followed by 2 of the Posse. 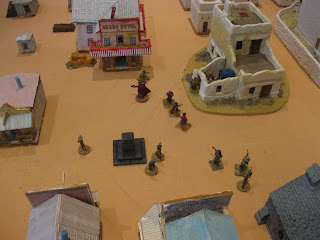 Turn 7
The wagon arrives as do the second shift of Angels. Now the Angel's habit of 'quantum locking' each other if they are in line of site of another Angel had already meant the game had been very tricky for the eldest nephew, never mind that they died easy, the set of 8 Angels in close proximity proved problematic. My original, not thought through idea was that they appeared around the beacon looking out. In the end we settled for deploying around the square away from the Posse but near the beacon and wagon.

Has it happened the Doctor was next to the beacon and was attacked twice and survived. The Angels difficulty in moving was also compounded throughout the game by very bad dice in attack.

Just ahead of the Doctor was Amy who was also caught out by the second shift's arrival. One got close enough to attack and for the first and only time in the game a good guy/girl was spirited away by an Angel.  Rory was not impressed.

At this step in the game it was realized that no other Angel could get at the Doctor due to the danger of 'quantum locking'. In fact it was becoming difficult to work out how to move the Angels towards their food without locking each other, plus we now knew that since some could be seen they could easily be shot. The heart went out of the Angels and we called it a day.

Victory to the good guys!
Technically on points the bad guys won at that point in the game, because the beacon hadn't been destroyed and the Doctor was trapped till someone destroyed the attacking Angels. Plus the majority of the towns folk were not in the Tardis. However we all agreed the Angels were just going to get mowed down and with that decision game over. 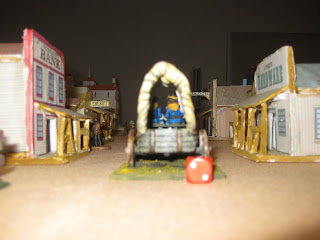 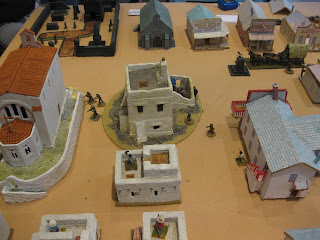 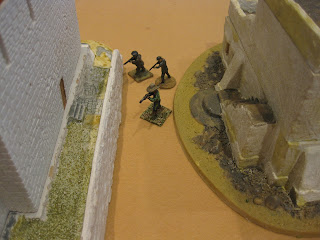 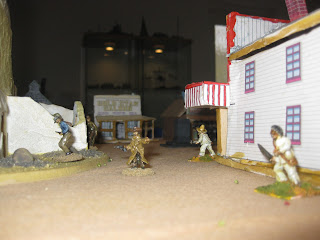 Not the most exciting game we've played. The Angels are tough to play and the scenario really needs to allow their strengths to come to the fore. Clearly this game didn't really work as planned. In my defense I thought the goodies would split up and gather the towns folk at the Tardis as per the scenario objective and this didn't happen. The goodies decision to gang up and shoot at the Angels worked brilliantly, and nullified the Angels being spread out to catch the fleeing towns folk. The fact that the Angels couldn't use their numbers in a swarming attack meant they could be picked off easily by groups.

The Doctor defeated the Angels this time but they'll be back after all they have all the time in the world to play with. Plus they still have Amy!

Email ThisBlogThis!Share to TwitterShare to FacebookShare to Pinterest
Labels: 7TV, Doctor Who, SciFi