Having interviewed an eye witness I have written up this months club game and posted it on the club website  here:  Conwy Wargames Club Napoleonic naval game

No pictures unfortunately.
Posted by Grigork at 12:28 No comments:

Unfortunately life got in the way for the players so I decided to duck out going to the club and catch up with the house renovations. Which to be honest was a relief, as the work here is going through a busy phase.

As an extra plus my fleet and counters and cards are all organised and boxed ready to go!
Posted by Grigork at 11:31 No comments:

I'm putting on a Star Wars Armada game this Sunday for the Conwy Wargames Club. It will give me a chance to play with my birthday presents which is always good news. I just need to decide how many ships to play with. I expect 3 players and with myself 4. My fleet now totals:

For July's club game Pete put a Battle Group Fall of the Reich game. The scenario was based on one in the book, but adapted for Pete's collection. He asked me to bring some Soviet infantry, but unfortunately an error in my text meant I arrived with 3 platoons less than required.

I was eager to try out the Fall of the Reich supplement as late war WW2 has been my favourite WW2 period since I was a lad. Of course back then it was because the Germans had great tanks, now I know more and the rules reflect the late war weaknesses.

Scenario
A Soviet spearhead breaking through the Seelow heights needs to take the train station (ours was actually a casino supplied by Dave), and the approach road from the north.

A German scratch defence force needs to stop them

6x4ft table playing down the length east to west with the railway track running east to west. The road ran down the middle of the table north to south with a cross road in them middle with the station and some buildings. A part from the station most buildings were in ruins, hence their roofs were left off. The railway line should have been raised with an embankment providing hard cover, so we played it as such. 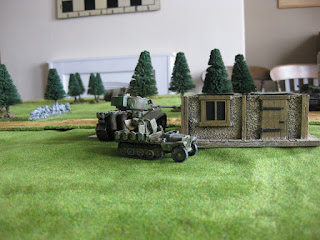 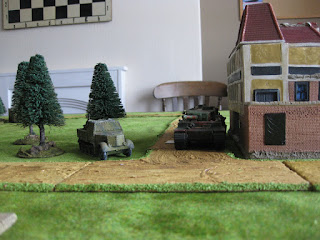 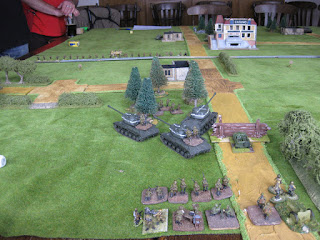 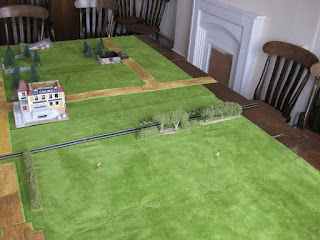 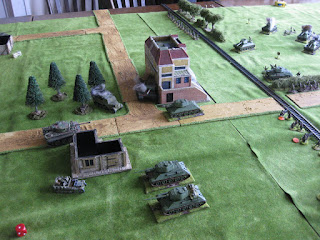 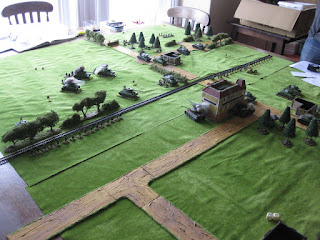 So who won? Technically the Soviets as the Germans had taken the most BR counters, but the Germans still had the objectives with reinforcements racing up the road.

Another great Battle Group game.
Posted by Grigork at 16:39 1 comment:

The big day arrived and the forces assembled and were re-organised. There is nothing like re-sorting your troops and somebody else's in to a division with a time deadline at the venue, plus gluing the inevitable breakages on the ships from transit!

Pete organised the event and supplied a lot of the US Marines plus Amtracs and variants, and a lot of the Japanese troops and equipment. I supplied the other half of the Marines and some Jap vehicles. Dave supplied the US armoured vehicles and more Amtracs and the majority of the landing craft plus a lot of Japanese troops and vehicles. I supplied the US Navy. The Japanese patrol boat was Dave's, and the jetty and sampans mine. The terrain was from Pete's and Dave's collections with Mel contributing a half the sea.

The Scenario
Dawn Okinawa. A combined US task force of Navy, Marines and Army had the following objectives (Pete supplied a more expanded description but I left mine behind):
Take the radar station
Set up a fire base on the eastern landing zone
Find the Kikka

I didn't get to read the Japanese objectives, but let us assume it was to make the US pay dearly for their invasion so that they think twice about invading the home islands.

The force organisation was taken from a Rapid Fire scenario found of the web for the invasion of the Philippines which had a mix of US Army and Marines (I'd turned up with a force organised for Iwo Jima hence the frantic reorganisation).

Japanese
I didn't see their organisation chart being a US player. My guess is that we faced:
1 x Tank Regiment
4 to 5 x battalions of infantry
1 x IJN crew for patrol boat - who started on shore

All the infantry and guns were in hard cover which could only be spotted once they opened fire.

The Japanese were not subjected to any morale rules except if they were surrounded they had to test if they fought on or committed hari kari.

Unknown to the Americans a battalion of Japanese paratroops were scheduled to reinforce the defenders.

Japanese right commanded by Pete  had the radar station
Japanese centre commanded by Dickie, later helped by Tony held a the jetty and a command bunker
Japanese left commanded by Alex held the air strip, fuel depot and another large bunker.

The Game
Since this was a large game we opted to have movement and firing as simultaneous, with the caveat that if you wanted to fire before moving it was declared first. This replaced the reserved fire rule.

Flamethrowers had their range increased from 6" to 9" since  an Arnhem game many moons ago where we found we couldn't shoot across a street. This is more a terrain we own problem rather than a rule problem.

I'd love to recount the game turn by turn but I lost track of turn numbers, and with the simultaneous fire and movement I didn't see everything. 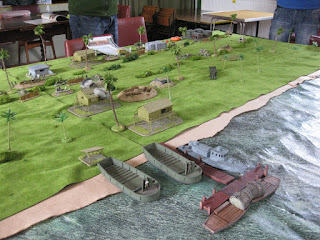 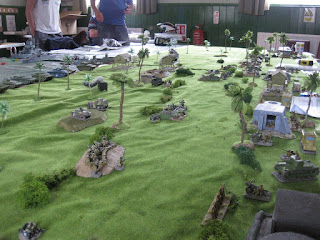 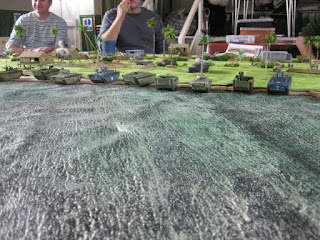 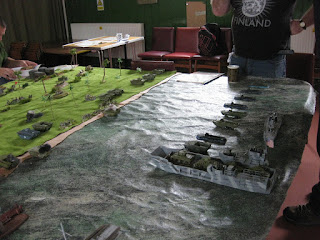 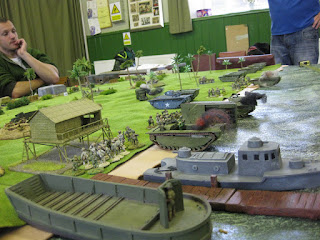 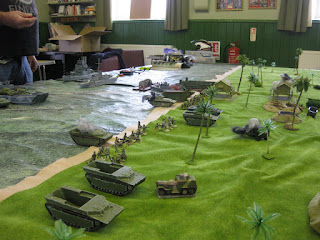 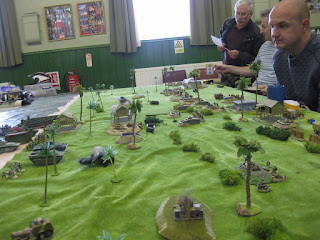 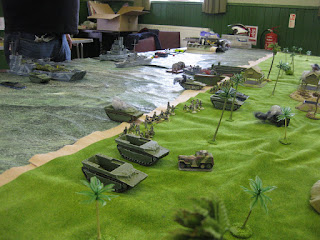 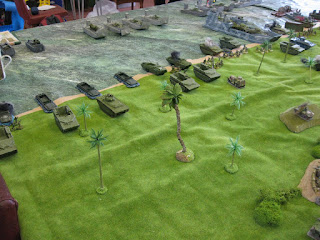 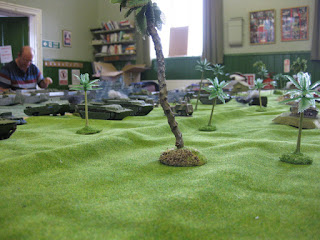 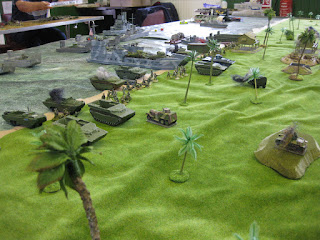 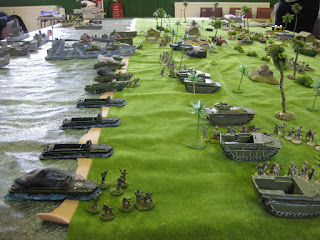 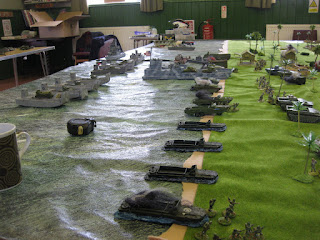 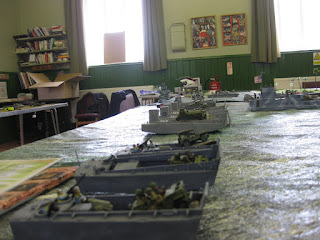 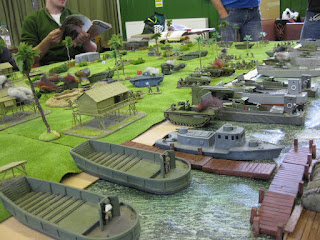 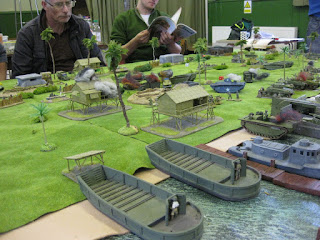 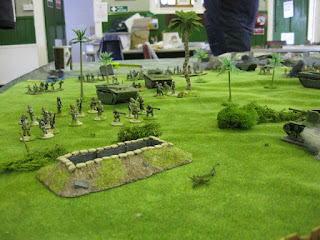 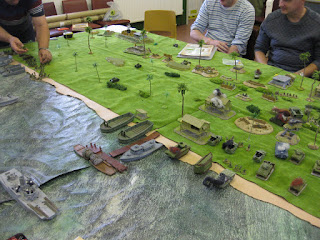 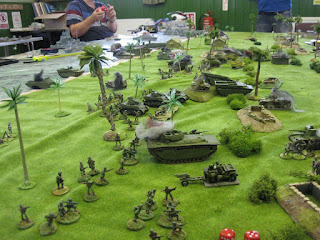 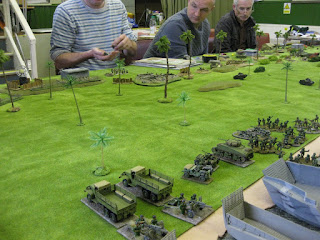 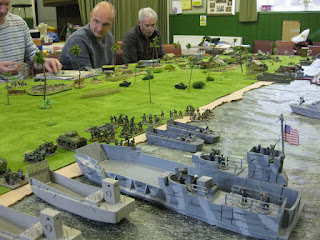 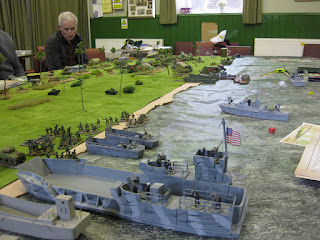 What a great day.

We ran out of time to reach a proper conclusion as technically the US hadn't met any of their objectives, but there was no doubt that they would. The only objective in doubt was the radar station. I think more Marine battalions would start having a morale problem fighting from the east to the west, especially as there were still some defences to over come in the eastern and central section.

The US wave 5 didn't get time to arrive. In the last move the Japanese Raider battalion attempted to parachute in and lost all planes but one, and they dropped in the jungle with massive casualties. Although the US Army had lost most of their Shermans the Marines' were still intact, as were their Stuarts and M8 HMC 75s while the Japs had 2 tanks and very little else with anti tank capability.

I hadn't played using Rapid Fire rules for 7 years so I was a bit rusty, especially around IDF. I got used to the club rule amendments quickly and they definitely speeded up the game, but I did find myself getting lost in which step we were on. Luckily Pete who organised the day and umpired with the help of Dave kept us all on track. On the whole the rules worked well for this size of game.
Posted by Grigork at 22:53 9 comments: