Mel and Dave arranged the club's nod to this year being the anniversary of Waterloo.  Using their 15mm collections and the General De Brigade rules the game was taken from one in the scenario book 2. 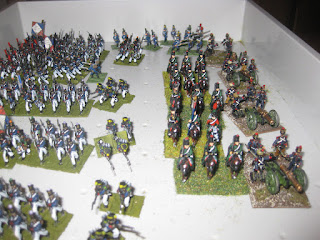 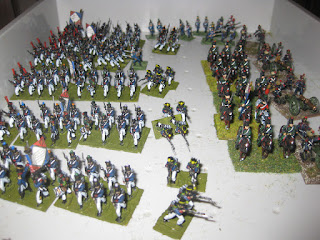 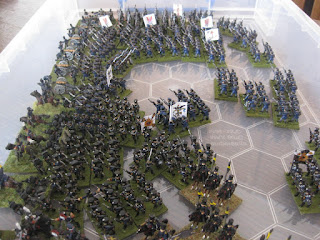 Commanders
Blucher personally directed the attacks on Placenoit, any light wound and he'll become a poor commander and can no longer inspire the troops
The French start being commanded by Baron Simmer, once the Young Guard come on Duhesme will take over. Simmer will become an ADC at this point with one other.

Deployment
The Prussian 16th Brigade start on the high ground east of Plancenoit and the French 19th Division starts in and around Plancenoit.

Terrain
We agreed that each urban section could hold a unit and a gun. The church section provides a +3 melee modifier. 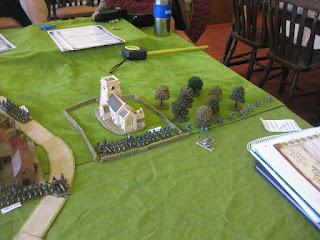 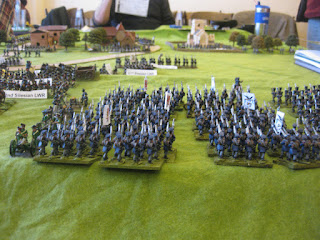 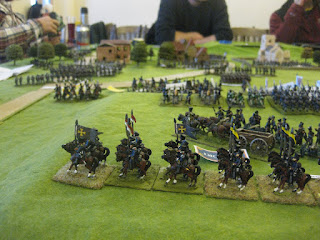 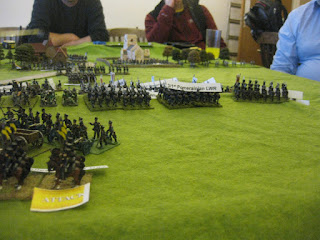 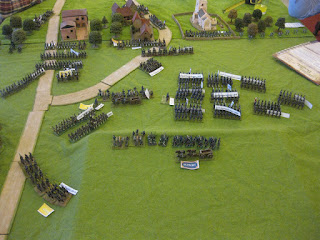 A resounding French victory and Marshal batons all round. Ignoring the fact the game needed another 15 turns to get a true result we'd stopped play at a point the French could claim the Young Guard and the part of the old Guard committed would be available for the attack by the Guards on Wellington.

I liked the rules, I still prefer Black Powder with which I think we'd have had a quicker game. Black Powder has less paperwork and movement is much quicker. I did like the fact that the larger batteries in General De Brigade took up space that restricted movement as they did historically. Regardless of which rules we'd used we definitely needed a full day to play this scenario. Ryssels brigade would have rallied and attacked again with the Prussian II corps which arrived on turn 9 which we didn't play. By roughly turn 14 Plancenoit should have fallen and the Young Guard would need to arrive, and their presence would be felt by around turn 18. I definitely would like to lay this scenario again.
Posted by Grigork at 11:42 2 comments:

The last game has been played for 2015 whose AAR will follow shortly. Where has the time gone? The next game will now be the last Sunday in January 2016.

The games lined up so far are:

While still horrendously behind writing up AAR's (I have 7 to do), lots of progress on renovating the house has been made.  I however have found time to start reading up on the General de Brigade rules. I haven't played these for years, preferring Black Powder. In fairness the General De Brigade I only played 2 games didn't get the hang of the rules and my opponent and I weren't familiar with them.When Black Powder came along they fitted my mind set like a glove. I am therefore looking forward to this Sunday's Conwy Wargames Club game recreating the battle of Plancenoit 1815, an important sub section of the battle of Waterloo. I'll be playing with General de Brigade veterans so I'll see the rules in all there glory.
Posted by Grigork at 09:04 2 comments:

This month Dave put on a Hail Caesar middle Imperial Roman vs Sassanid game using the scenario 'Go meek in to the desert' supplied in the main rule set.

The Romans were defending an oasis with 3 divisions on board. The cavalry division had to dice to come on from turn 2. The Sassanids started off table and had to dice to arrive from turn 1. Their objective was to oust the Roman invaders from the vital water resource.

We used a 6ft x 4ft board with the oasis marked by palm trees in the middle. We didn't have a hill or tower as in the scenario.