Episode 1 'You better watch out, you better not cry'
Synopsis


It’s Christmas Eve NORAD has reported on object approaching the Earth. It was tracked over the North Pole where the object either split in to two or another object appeared. Both hit the Earth in Alaska. Dr Kate Stewart, the Brigadiers daughter leads a United Nations team of Brits, Canadians and Americans, with the US providing the soldiers on a mission to investigate. One crash site has been pin pointed and the team get ready to parachute on to it...

In WW2 they wanted Europe now they want the Earth. They have bided their time on the dark side of the Moon since 1945 and now is the time to act.  The Moon Fuhrer has dispatched a Valkyrie to intercept a vehicle of one of the factions preventing his glorious return. Recovering this technology will further the Reich's goals, but most important of all is finding the location of the secret base the perfect start point for INVASION!!!
Cast      500 points of Moon Nazis, and U.N.I.T

Location
The episode takes place on a 6’ by 6’ table in snow bound Alaska. In one quarter is a hill with a crash site, another a wooded long ridge, then a tall wooded hill and the final quarter woods in a river valley.
There is deep snow up the slope of the crash site which reduces movement by half. The crash site summit must be climbed.

Set Up
Moon Nazis 24” from crash site coming from the direction of the frozen lake where the Valkyrie is hidden
U.N.I.T parachute on to crash site. Use parachute rules.

Special Rules
On Location rules for snow.
Agility test required while clambering on Sleigh.
Intelligence test required to find hi tech items in sleigh
Sleigh Pilot 1138 also known as Dobby has infiltrated the U.N.I.T for safety. He is immobile with injuries and fear.

End Credits
The episode will end if all the opposing models are Stunned, Dominated or are otherwise removed from play. The attacker can exit his models via any table edges in his set-up area.

U.N.I.T parachuted in and managed a close grouping around the crash site with only Dr Kate herself being injured and 2 extras Captain John Smith III and a scientist Harvey Dent Jnr being knocked prone. The Moon Nazis went next and realised they should have played their unhinged toff's star quality before the game started. Marine-SS Oberstfuhrer Otto Von Krank promptly played his 'Friends in high places' with U.N.I.T dicing for each hero who on a 5+ had to be removed from the board only to be allowed to re-enter on d6 4+ at the end of each turn. U.N.I.T began to display the kind of dice they were to have for the whole game as Dr Kate discovered she had not in fact landed right next to the crater but was somewhere in the wilderness.The power of hindsight shows that we should have diced for extras and not heroes, oops!

For their actually move the Moon Nazi's opened up with their HMG on the hill and all those that could be activated plodded forward through the snow.

Kate fails to return at the end of the turn.

The Moon Nazi's win initiative and continue to move under the cover of HMG fire which takes out 2 U.N.I.T paras on the crash sites slopes. Poor dice throwing mean they do not move too far in the snow. This turn more SS Marines add their fire the HMG's weight and the U.N.I.T HMG has a man knocked prone and Sergeant Rodriguez is a goner. His extra leadership is key without Kate. Only Captain John Smith III can lead now! 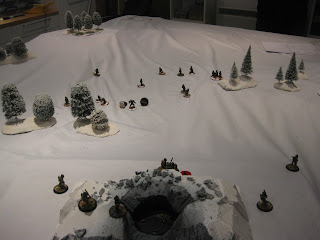 Kate still somewhere in the wilderness.

A 1 is rolled for initiative, a swift d6 roll on the Natural Hazards table results in a high wind blowing across the table giving a -2 to hit and a Agi or Str test if climbing.

The gun fire drops and most people from both sides struggle to get closer to the enemy. U.N.I.T's technician Lee Dixon shook her hair and peered in to the crater and confirmed it was in fact a crater. 2 U.N.I.T troopers being very confident attempted to climb to the top of the crater to get a better shot but instead slipped and fell.  The investigative academic Malcolm Taylor was more lucky and pulled himself up to the edge of the crater, like Lee he peered in.

Just as he leaned in to get a better look there was an almighty flash. Malcolm failed is agility roll and flew backwards knocking himself out and taking a hit. As the light dimmed a mysterious red craft appeared lodged in the crater....

Oh and Kate still somewhere in the wilderness.

The Moon Nazi's recovered first from the blowing wind, and chuckled to themselves that more casualties had been caused by wind than bullets. So U.N.I.T have found the sleigh. The HMG team eliminated their U.N.I.T counter part, the previously prone machine gunner saved from death because he'd never bothered to get up. Rifle fire took out another trooper on the edge of the slope, and then a third shot ends Trooper Ronson's game. The good news he'd fired his rifle in Turn 2, but the legend of have flame thrower will not fire continues.

Dr Brunhilde made it over the Klinkerhofen and healed his wound with a handy pick me up syringe of goodness (ironic for a nasty piece of work). 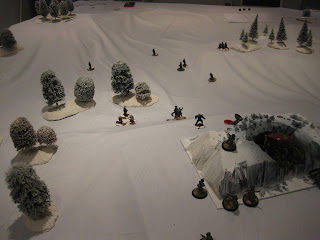 Turn 5
U.N.I.T gain the initiative. The prone machine gunner leaps up and charges Wolfgang and is swatted like a fly. This takes the wind out of the paratroopers sails and they begin to take defensive position to fire on the oncoming Nazis. Captain John Smith III who has made it to the edge of the summit takes out the panzershrek gunner. Hurrah first blood for U.N.I.T at long last!

Meanwhile in the crater Malcolm and Lee are scrambling around the inside of the Sleigh. Between them more more item of marvelous technology is found.

Both casts take a breath and blaze away at each other causing more no U.N.I.T casualties but the Moon Nazi's start to fall.

The focus of the action was U.N.I.T's decision to try out the new tech in the Sleigh on the Moon Nazis. Anything to slow them down. Lee places the items in her satchel and swings out of the Sleigh to climb out of the crater. Just as she reaches the rim she slips her satchel snagging on a ledge as she fall towards the still molten rock cooling from the Sleigh's impact..... queue dramatic music and end credits. 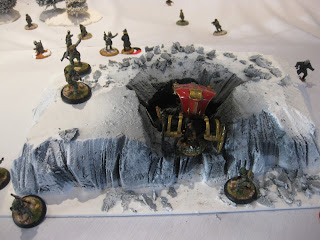 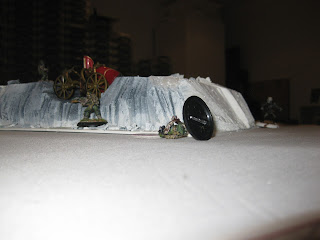 Well we all had fun in the true Christmas spirit. The plan to play 3 episodes went out of the window quite quickly as I'd made the game too big. My error came about from building the 500 rating point Santa cast first planning to split their appearance over 2 games. I then built the other lists to match and didn't factor in phased appearances.  Having said that the objectives of the planned first 2 episodes were achieved. The Sleigh was found and high technology discovered. The only thing missing was an appearance from team Santa.

The 2 rule errors added to the narrative of the game, but did hurt U.N.I.T quite badly. The Moon Nazi's argued if this hadn't happened they'd never would have stood a chance.

Stay tuned for Episode 2 'Gonna find out who's naught and nice'.