I'll be running the X Wing game, my first for the club. Apparently I'll have 4 players possibly more. I believe no one has played X Wing before so I'll keep it simple plus this could be the largest X Wing game I've done. I've decided to use 2 rookie X Wings and a prototype A wing facing 3 rookie Ties and the lowest skilled Tie Advanced. If I have just 4 players I'll play the A Wing. The scenario will take place sometime between the battle of Hoth and the battle of Endor. The X Wings mission is to protectthe A wing prototype, ideally destroying all witnesses to it's performance. The Imperials need to knock it out so it can be retrieved and studied.
Posted by Grigork at 15:13 No comments:


I have now tidied up the mess I made knocking 3 walls down. I am now waiting to find out how much plaster I need to knock off the walls in the hall way. In the mean time I can strip out old light fittings. The main focus will be the bathroom, because you don't want to walk far when your in a critical moment of a game and you gotta go, plus we need a more modern bathroom to survive. Gosh I miss a shower. Don't worry we still we still have washing facilities and critically a bath. We haven't moved and not washed for months!


I've posted lots of pictures of the future wargames rooms so I thought I'd share pictures of the temporary camp. There is no board(s) until the new rooms are done and my existing boards are not in the photos as they are split between my Mum's and an unused toilet not in shot.

The walls have come down in the hallway to reveal the space I am currently planning to use as a painting area. I've discovered the ceiling is a bit lower in this space than I was expecting hence the top of the wall still in place. 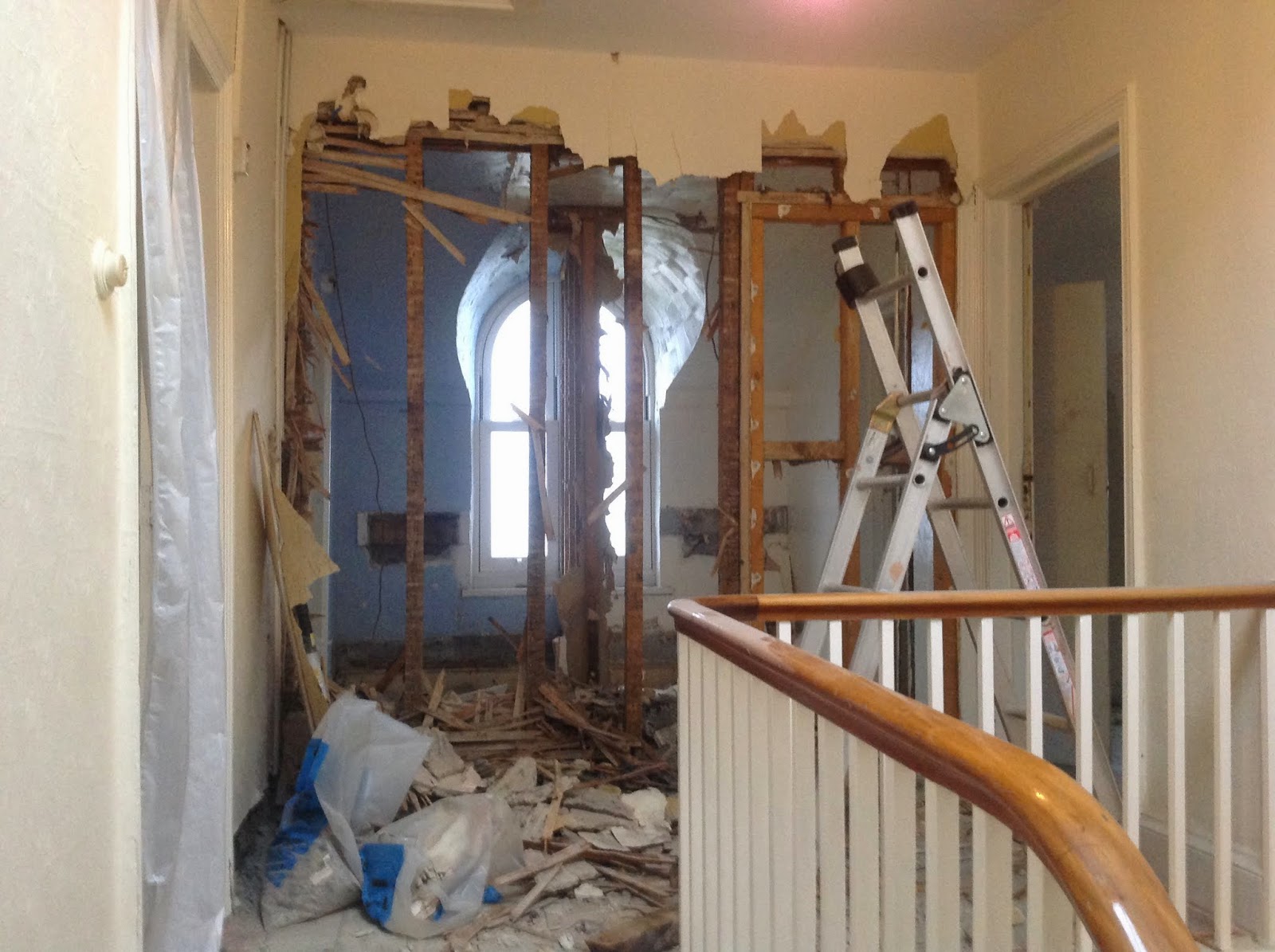 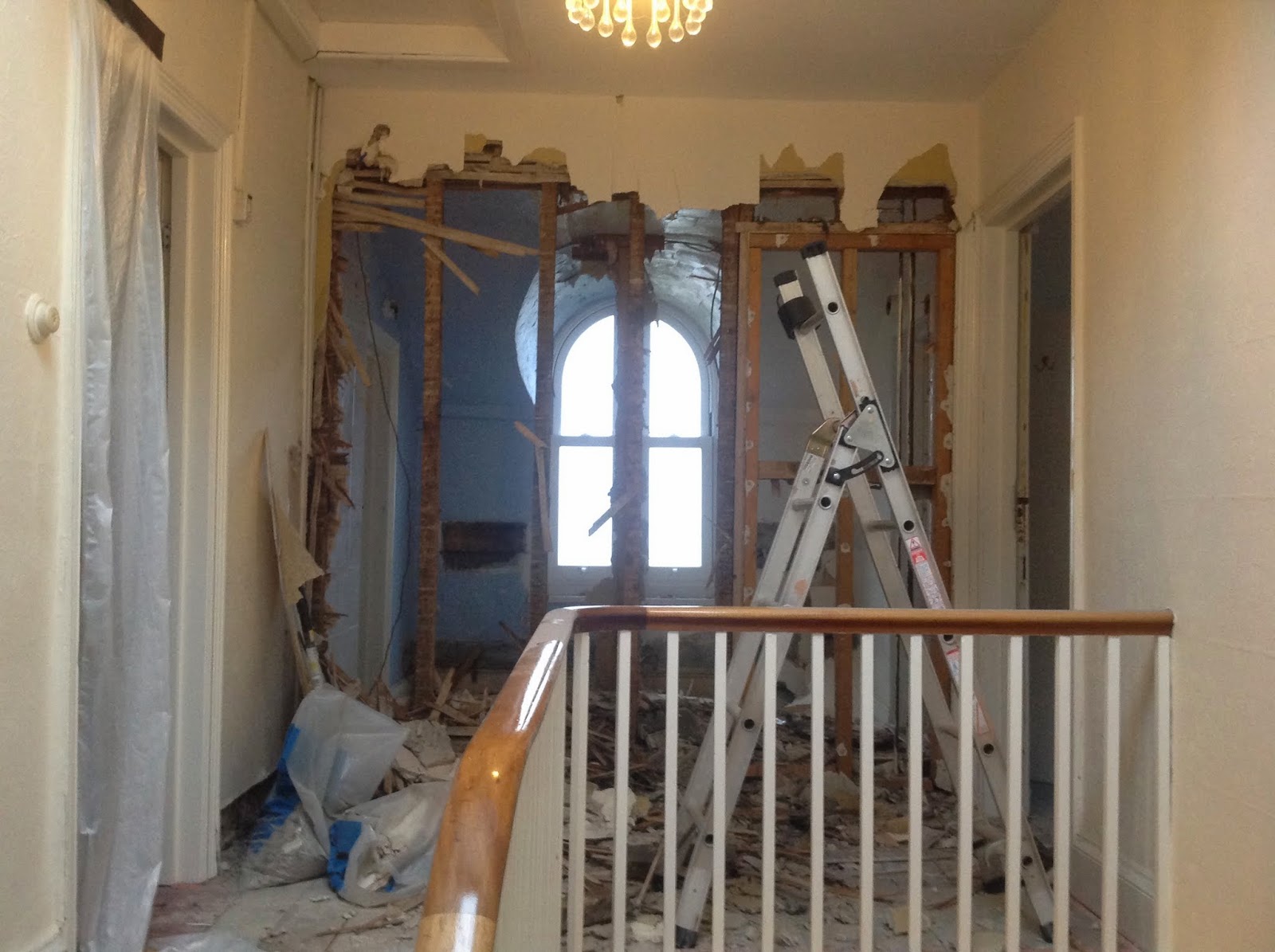 Next job rubble removal  and then take out old wood supports.

From a building history point of view I was surprised that the 2 bathrooms were not 100% modern, but at one time they'd been a single bathroom. You can see the newer wood frame outlining where the original door used to be on the right. The rest of the wall facing the camera was lath and plaster which covered the house in dust as it came down.
Posted by Grigork at 13:00 No comments:

Wargames Eyrie - Room 4 home of the big board

The fourth and final room of the planned Wargames Eyrie. I want a 12ft x 6ft board in here.

In the old house I based this on 8 kitchen cabinets which served as storage. The units were split in 2, with 6 cabinets a gap then the equivalent of 2 more cabinets. The 6 cabinet base was used for a 6x4 or 8x6 board before extending to 12 x 6. You probably guess I had 3 6x4 boards that at the smallest configuration were stacked on top of each other.  I had planned to do the same here but I am not sure.

I may try cabinets on wheels to give more flexibility. I am not planning to put any storage on the walls to maximise space for chairs. I like to use office chairs so when you're tired you can glide up and down the board with a push of your legs. This luxury started because in the old house the only space chairs I had were office chairs.

2014 was quite a wargaming year. I didn't expect to get much hobby time in as we started the year trying to move and start a business. Both took a lot longer and took a different form than originally envisioned.

Places Visited - lots
We took an early holiday knowing the year was going to be busy and I found the L'Iber Toy Soldier Museum in Valencia. Marvelous place. My favorite display being:
Carlist War displays

Games played - 10
My usual monthly game fixture, which with the normal rhythm of life was never added up to 12 games, was suspended. Sad but necessary but with the delays in the move etc we did get some games in.

15mm Gruntz's game at the Hammerhead Show. First try at these rules and enjoyed them. Good preparation needed. I now have added a few GZG figures to my growing very small 15mm collection.

X Wing  - always great fun.
2 x Dead Mans Hand games - first play of these. I liked it so much I had Santa being me a copy. I still like Legends of the Old West for story telling but Dead Mans Hand is quick to set up and play.
15mm Bolt Action game - another first try out of rules. Need to play more to see if I like them. Easy to pick up though.

In light of me moving away we arranged to meet up at the Battle Group Ponyri Campaign. This was a first for Battle Group and a first for me attending an organised event where I played strangers with my own armies. What a blast and I hope to go to the 2015 event. 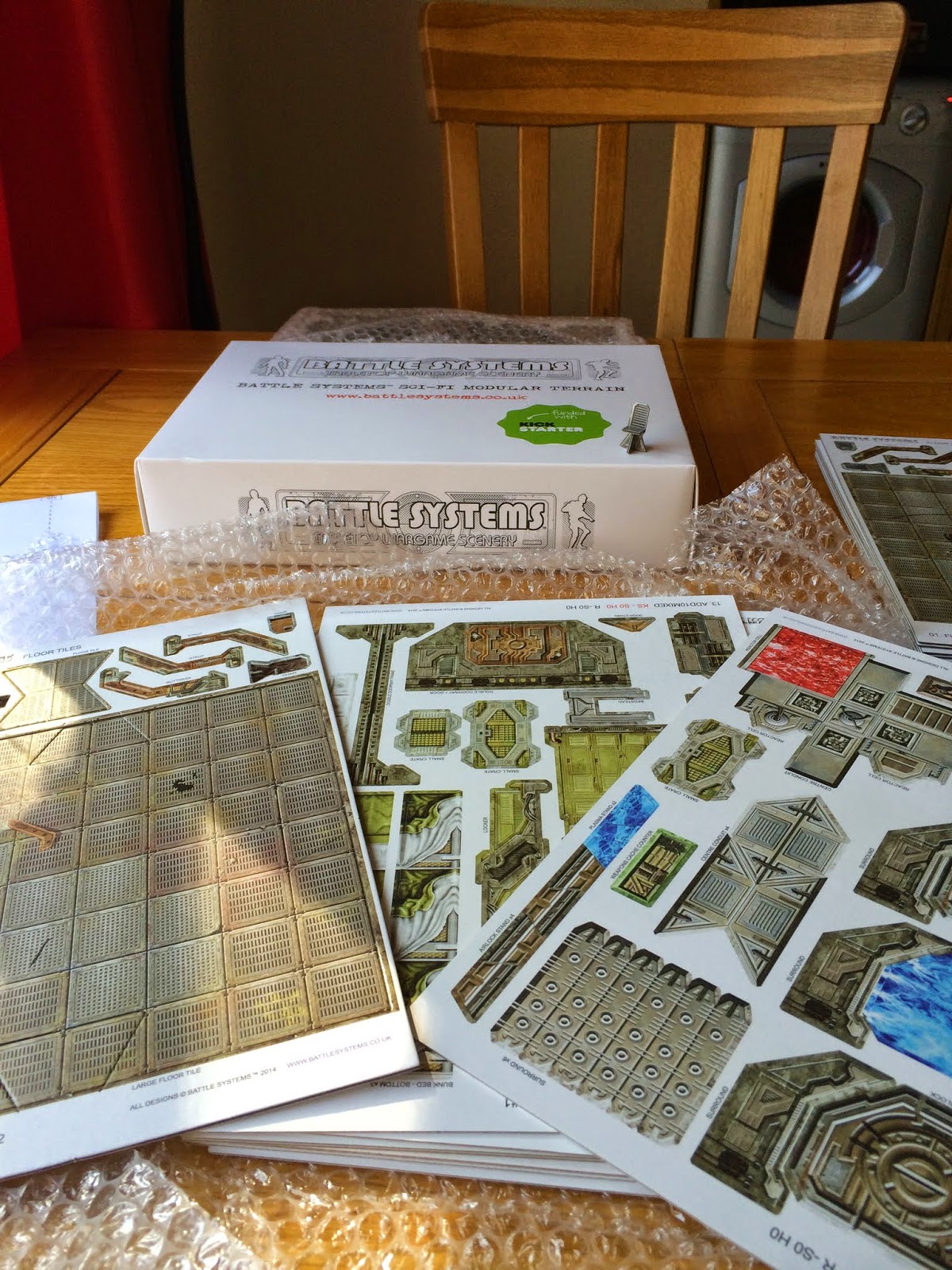 The Move
The great pack up 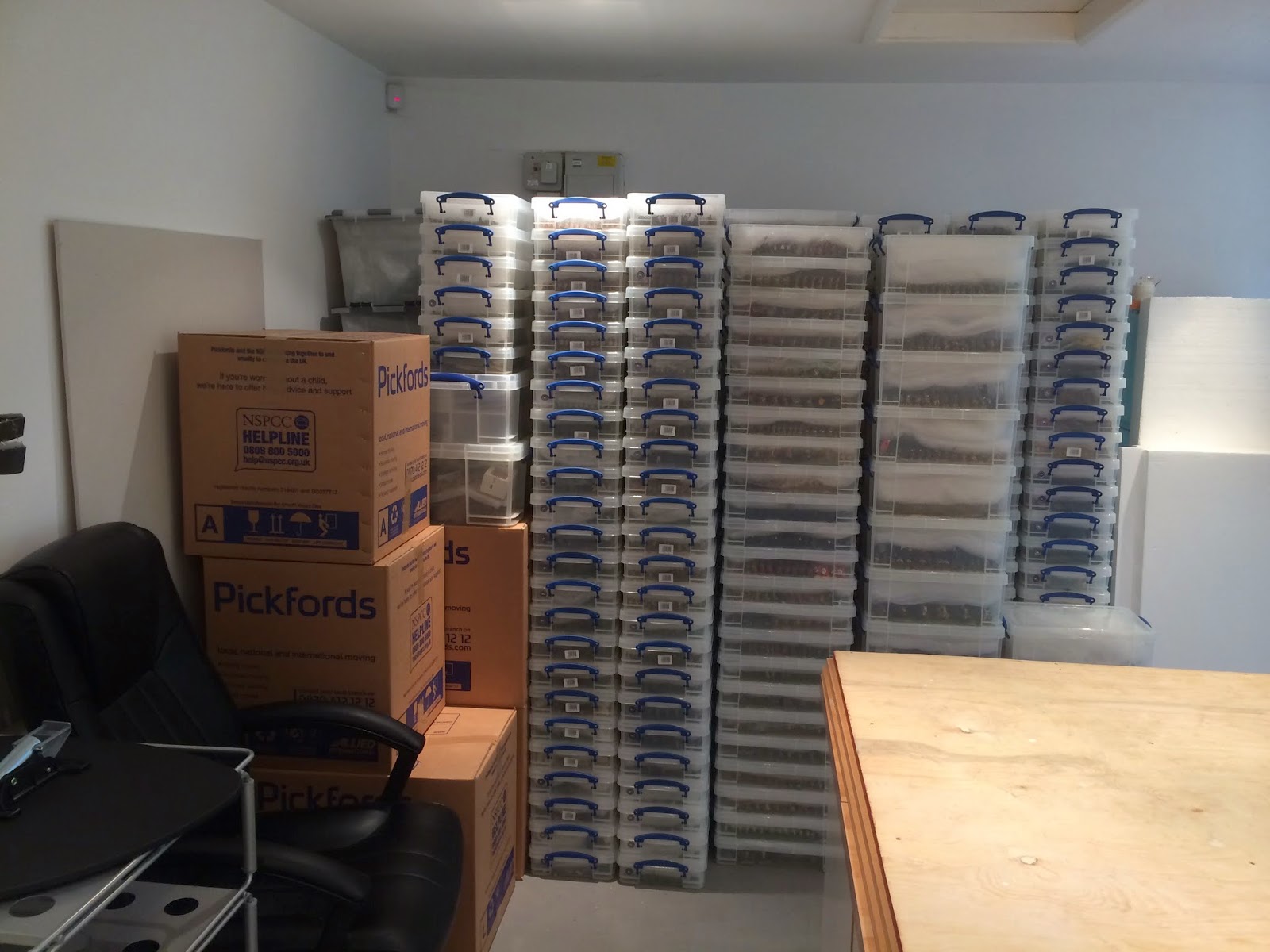 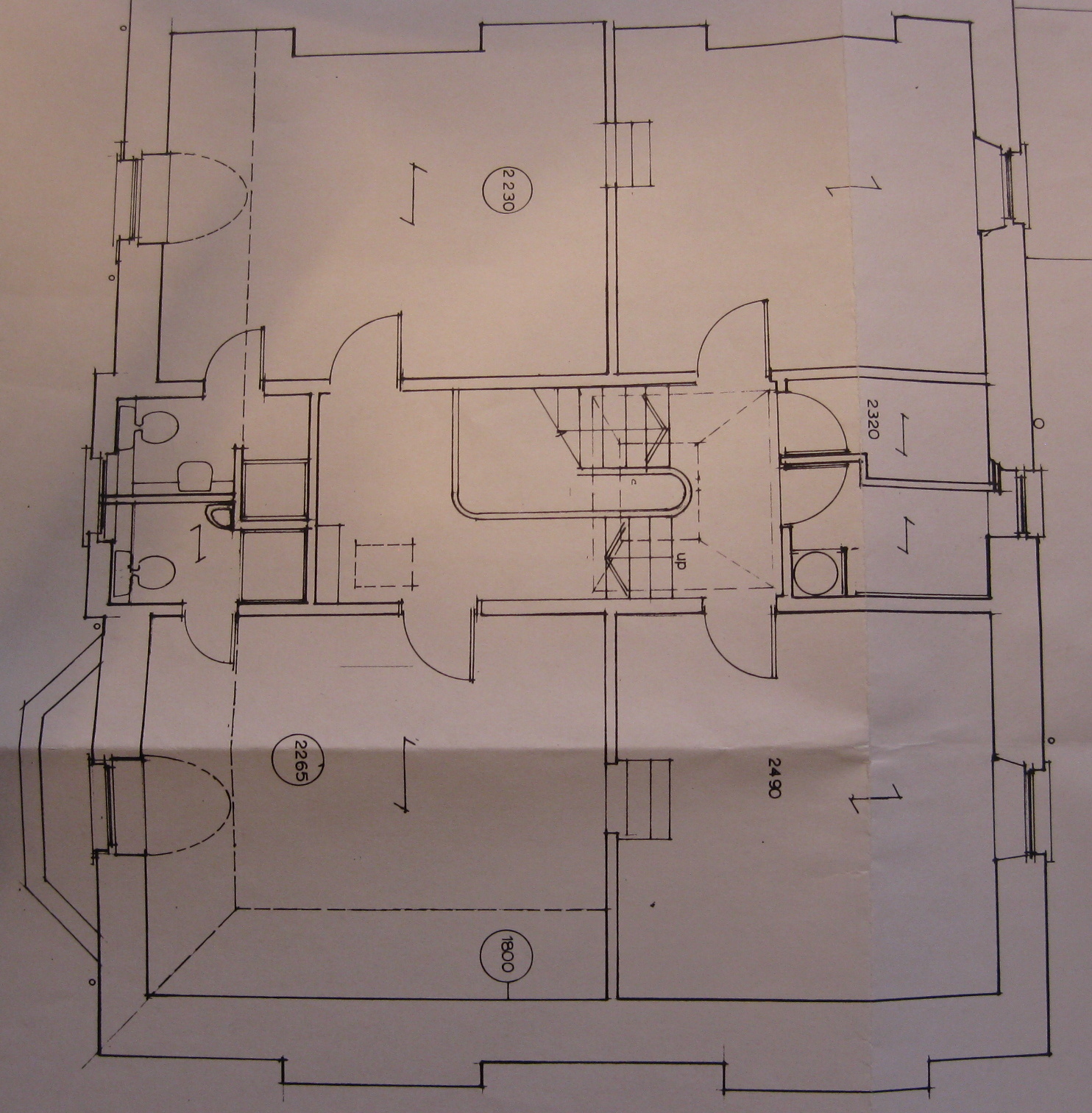