I can't make Partizan this year so I'll console myself by popping over to the game on Sunday. I am quite intrigued as it will be 1/72 WW1 fighter combat using home grown rules.
Posted by Grigork at 14:25 No comments:

Since I didn't go with a list I wasn't sure if I what I would buy. At no point did I consider not buying anything. I did manage to curb the retail urges to games I am actually playing, plus one new game.

I didn't see much Blitzkrieg era figures and models for sale, I was looking for French and Polish. I did see lots of Barborossa period Soviets and picked up 3 x BT7s, and Kursk period 2 x Matilda's, 1 x Grant, 1 x SU100, 1 x SU152 all in 20mm ready painted for £5 each. They were decast models and I felt I'd got a bargain.

Just before going home while my compadre tried to make up his mind about a jetty to use in this summers big game - which is a WW2 Pacific island assault game in 20mm, I wandered off and picked a T-35 kit from Plastic Soldier Company.

The big splurge was taking the plunge and buying Star Wars Armada. A lot of traders had the wave 1 releases on show which looked nice, but pricey in my opinion. Equally a lot of traders were selling Armada. The very last stand I got too was selling it for £50, well I'd never seen it so cheap and the little voices in my head were unanimous 'get it, get it', 'if you walk away you won't get it this cheap again'. £50 later, I now own it and it looks very nice. Definitely different from X Wing. For starters there are a lot more rules.

At the same stall I picked up a Decimator for X Wing. I originally wasn't bothered about this model until I read a review that mentioned it was Mara Jades ship, the future wife of Luke Skywalker. I then remembered readying about it in the novels, and with that connection I had to have it.

Spent up, with change to return home and say 'look I didn't all my money' I smugly headed for the rendezvous to get my lift home.

Bonus time was Mel giving me his copy of Saga so I didn't need to pick one up. I like to have the rules being played in the club and my first run through left me with the need to read through them. Mel decided the rules weren't his cup of tea, and I only want them for club games rather starting my own collection and games.

As I write this a couple of days later I still have that smug glow of having got a bargain.
Posted by Grigork at 07:03 1 comment:

I picked up Dave and drove over to Mel's and swapped cars and Mel kindly drove us all to Sheffield. I managed to get some great bargains which I'll post about later, and all in all we enjoyed ourselves. I thought the show was a lot quieter than I'd seen it for a while. I was surprised how easy it was to park, normally I am on the grass but we managed to park in the carpark across the way. The bring an buy was poor but there were lots of traders and the standard of games was very good this year in my opinion.

So what inspirational delights did I get to see... 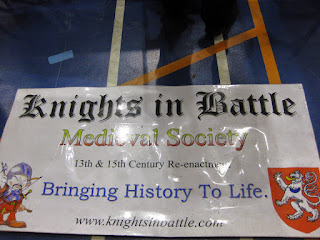