The 3rd game of the day saw us graduate to the advanced rules and a scenario game.

The advanced rules were additions to the free rules added by Chris. These were rules for height which in summary were:

In the command phase you set which altitude you are at by playing a climbing card - max move 2 out of 4 altitudes, diving and flying level.

During the firing phase if you were diving you had a shortened range and less dice.

A British squadron is patrolling in no ones land specifically to catch the Red Baron alone and shoot him down.

The British have 4 planes (Dave, Dickey, Pete and Pete)

The Red Baron (me), and Tony with 2 German planes that can come to the Barons rescue. 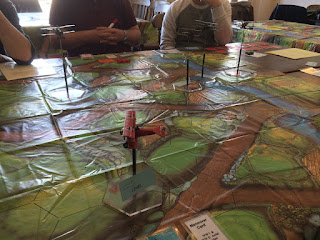 The second game of the day started with Dave, Pete, Pete and Dickey finishing their game 1's first and deciding to move to 1 table and fight it out. Once Tony and I had finished we too flew over and joined in. 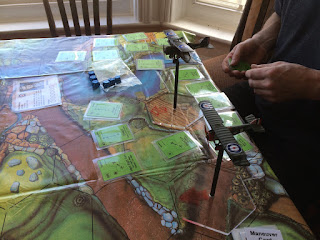 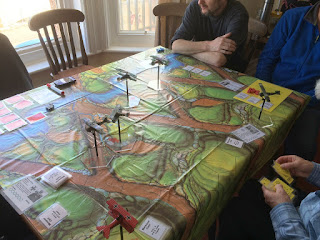 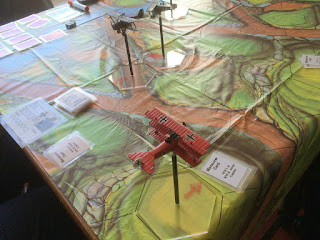 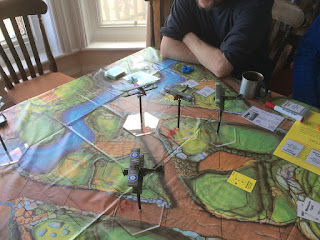 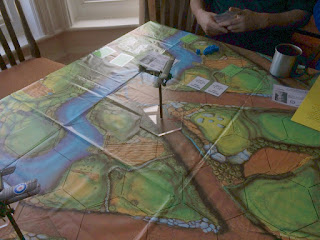 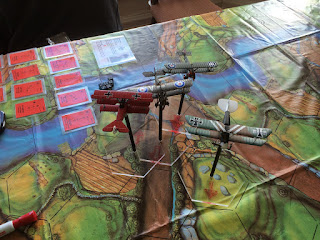 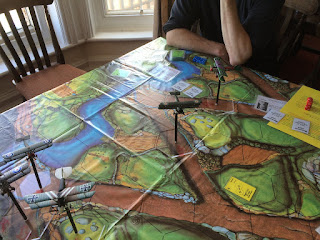 
The first game we split in to pairs on the 3 tables to battle it out using the basic rules in one on one dog fighting.

Dickey took to the air for Germany as Ernst Udet and Pete flew as the Canadian Billy Bishop. 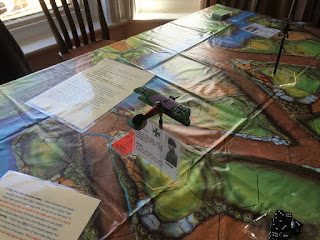 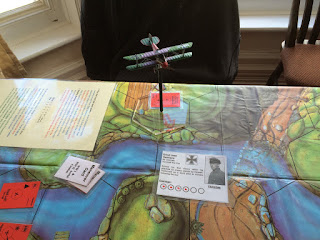 Dave took on the persona of Herman Goring flying for the Kaiser and Pete took the role of Jim McCudden a British Ace.


Table 3 Myself and Tony

For the monthly Conwy Wargames Club in May new member Chris volunteered to put on a WW1 air combat game using 1/72 planes. We were warned they were simple rules designed for kids, and in fact he'd played them with kids he taught. Sounds ideal for an afternoon gaming, easy to pick up rules with the focus on fun.

Game 1 - 2 players squared off in a dog fight. Since there were 6 of us this was actually 3 games on 3 tables.
Game 2 - The players from 2 tables joined each other for a mass dog fight, shortly joined by the final 2 players once their dogfight had concluded on table 3.
Game 3 - Hunt the Red Baron. A British squadron tries to intercept the Red Baron caught  on his own behind his lines.
Game 4 - A Russian  Alexander Kazakov must ram the German planes as his machine guns are jammed. A British squadron comes to his rescue


What great fun we had. The landlord of the The Anglers popped in because we were laughing so much at each others misfortune and the tall tales being told he thought he was missing out. The joy of simple rules is that they allow more chatter. We also met a prospective new member who popped in to say hello and who had timed it perfectly to join the start of Game 4.

Teaser pictures from the games with follow up posts for the After Action Reports as quick as I can write them. 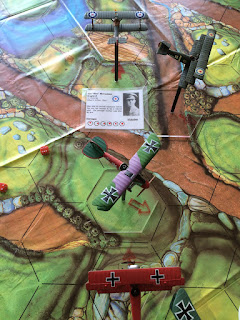 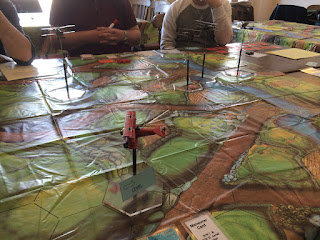 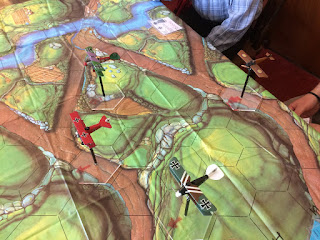 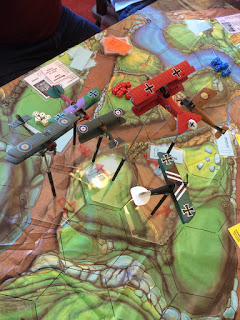