Pirates of the Caribbean

'Pirates of the Caribbean' was the title of the scenario handed to me, Gaz and Tony by Pete who organised the game set in 1752 during the Seven Years War. Pete had found the scenario in one of the wargame magazines.

In 1752 the British Admiralty signed a treaty (unofficially) with a known pirate Francis L'Ollanais who was based in the island of Anguilla. The treaty allowed the pirates to continue their trade on everyone but the British. Admiralty also agreed to improve the pirate harbours' defences.

When Spain and France found out they were outraged and organised an expedition to destroy the harbour. Spain provided money and use of Fort Augustine, while the French provided the ships and troops who were already based in the region. The French Comte de Lowerdal was appointed commander.

The British were aware the French were coming as the French were delayed by storms, other problems and the loss of many of their horses. Regardless the Comte decided to continue with the plan.

The Comte had learnt that the pirates kept their powder and spoils in the same building and capturing this would deliver a knock out punch. The French army landed unopposed and formed up with the artillery in the middle and the infantry on the flanks.

French
1. Find the powder and gold
2. The Comte commands' the artillery and grenadiers, the 2 brigadiers the infantry. The brigadiers hated each other so first to get to the gold wins the glory

French special rules:
Off table sloop Canteloup (6 guns) will provide fire support on a score of 3+ D6. 1 or 2 and it is stuck on a sand bank.

Pirates
1. Protect the gold - place a Gold bar in one of the houses

Pirate special rules:
Pirate/British gun crews man the fortifications at the start. The pirate crews arrive turn 1, the British arrive on a D6 score of 6 on turn 1, 5 turn 2 etc 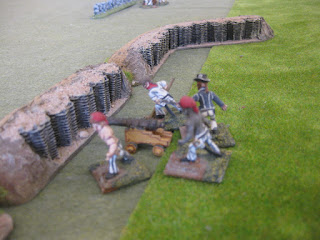 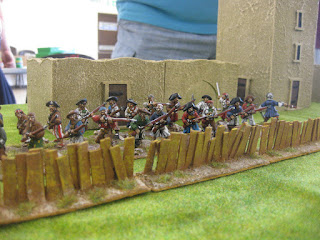 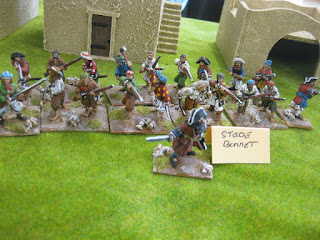 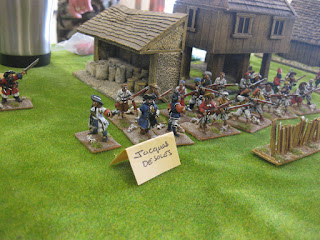 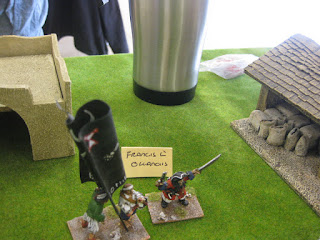 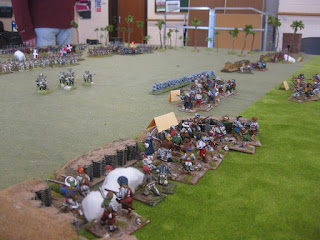 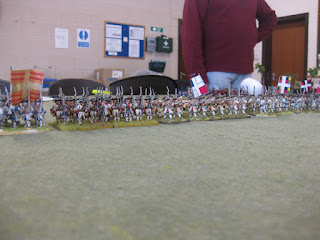 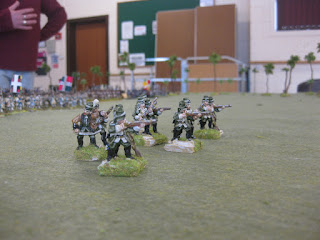 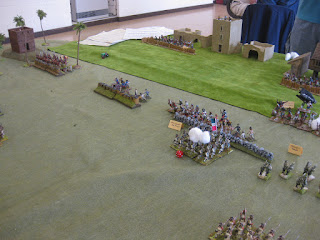 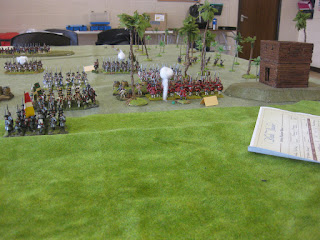 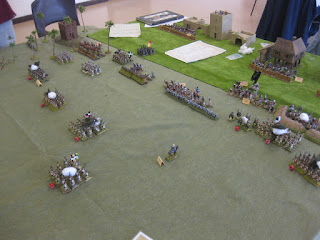 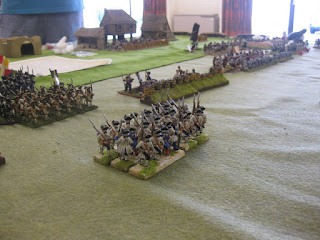 Pete put on a great game, and Tony's pirates with British help put up a spirited fight. In my glory seeking I made Tony focus on me allowing Gaz to slip in having pinned the British Grenadiers in place leaving the way to the town open. I liked Gaz's use of 2 lines which worked well unlike my 1 which left me with no reserves.

We had a lot of fun playing this and the Black Powder rules worked a treat.
Posted by Grigork at 16:36 1 comment: