Headed south yesterday to meet up with chums and travel on to Reading to visit the Warfare show put on by the Wargames Association of Reading. I'd been to this show once before in my teens and it is still at the same venue. Overall it was a great day out plus I managed to purchase a book I'd been after for ages.
The first hurdle I had to overcome was the threat of a fine my rendezvous location had plastered everywhere if you did what I wanted to do which was park the car and transfer to another. Well that wasn't the actual threat but you get the drift, being naturally risk adverse this did play on my mind a little for the day. I am obviously not that risk adverse as I left the car there anyway, and it payed off as I wasn't clamped or ticketed when we got back. Hurrah! or more Phew!
Nattering on the way down my kindly volunteer driver for the next 2 1/2 hours was on the look out for 15mm tanks for Russians, British and Germans. My other companion just wanted a browse and a visual feast. As for myself I had my trusty list, see previous post.

The wonders of SatNav got us there in good time (11ish), and after a bit of messing about, and choice words about ample parking we managed to park up. In defence of the venue there was lots of parking but it was full. No one directed cars to where the few spaces were and some spaces were blocked off. Luckily for us on our second three point turn at a dead end the last remaining section was opened and we squeezed in!

Entrance to the venue was nice and easy and well organised. I liked the use of badges to show you'd payed to get in so you could easily pop out to place loot in the car, or visit one of the food facilities not in the halls. We quickly saw wargaming glitterati such as Henry Hyde of Battlegames and Miniature Wargames, Guy Bowers of Wargame Soldiers and Strategy plus Kevin Dallimore the legendary painter.

The layout was good, and more rooms were used than when I'd last visited. The main hall was almost exclusively for traders with very few demo games, and boy were they packed in. If an average wargaming gentleman with back pack stopped to look at stand, and dare I say it bend down for a closer look the aisle was blocked, or if two people side by side looked at opposite stalls you had the same effect. This didn't put me off and I found everyone polite. One of my colleagues however was barged a couple of times and calming words of we're not in the north now had to be used.

The bring and buy was the best I've been to in a while. We went in here first. There was plenty of space, and the goods were nicely arranged by period/genre and to a degree scale. Our hero driver hoovered up lots of really nicely painted, and priced, tanks very quickly getting most of his list at the first stop with the added bonus there were ready to play. I was tempted my a 20mm Puma and sdkz222 which beefs up my German scouting assets and replaces a broken one.

The remaining rooms were for competitions and demo games. I loved the use of squash courts for one of the competitions.

The main benefit for me for heading south for a show was a chance to see some suppliers who don't make it up north much. I got to chat to the owner of Gringo 40s Ged Cronin, who was a really nice chap describing himself as a wargamer first rather than in it for the money. I wanted to see the size difference between his figures and my Foundry collection. Firstly Gringo 40s are larger, probably by 2 to 3mm, but are absolutely beautiful figures. The troop type range for Maximilian is also larger with more to come, particularly cavalry. A future investment I think.
I had a look at RH Models. I'd last seen these at SELWG in 2000 (I think) when I purchased a load of Korean War Chinese. Their website doesn't have many pictures so it was good to see these ranges back in the flesh, although no Korean War stuff to see. The figures look better than I remember them, and I overheard the gentleman running the stand telling a customer they are going through some remoulding at the moment. I was going to link to their web page but found another site with their latest releases on which explained that the main site is under going an overhaul.

It was also good to see Crooked Dice and be served by the Kevin Dallimore. I spent a joyous amount here on 7TV Heros tokens and events cards, Savage school girls and the next set of not Blakes 7 figures. I also got to see a draft copy of Other World Miniatures upcoming fantasy skirmish rules based on 7TV's action engine. This will not be a Crooked Dice product but I've had so much fun with this rule mechanism I'm looking forward to it coming out. Would you believe I've never played a dungeon crawl on the tabletop.
Naturally some of the regular faces from the shows I normally go to were there too. I discovered I hadn't missed Magnetic Displays/Coritani at Derby Worlds as a fox took out the van. No one was hurt except the fox.
I caught up with Curteys/1st Corps as well. It was interesting to discover that they were remoulding some of the old 1st Corps range including the original 28mm WW2 figures whose appearance launched a new scale for WW2. I was fascinated to know that they use the same designer/sculptor for all their ranges and he changes his style for Curteys', Kingmaker and 1st Corps. I have a nice collection of their Chinese Waring states figures and Mongols and Sung. Amongst other things they are currently broadening their Medieval range taking back to the Crusades. I liked their new Medieval camp and camp followers.


Now pictures of all the different games I saw: 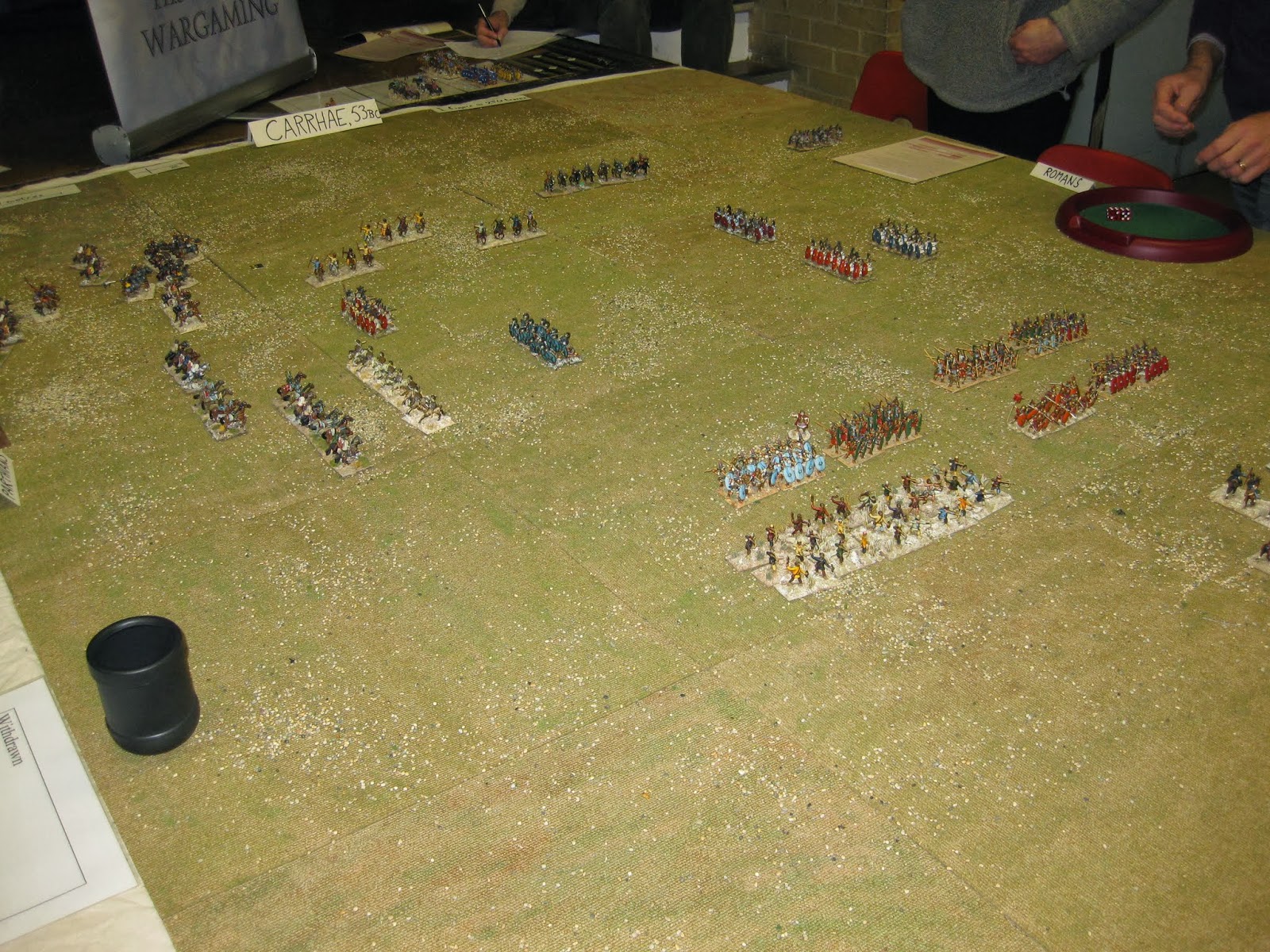 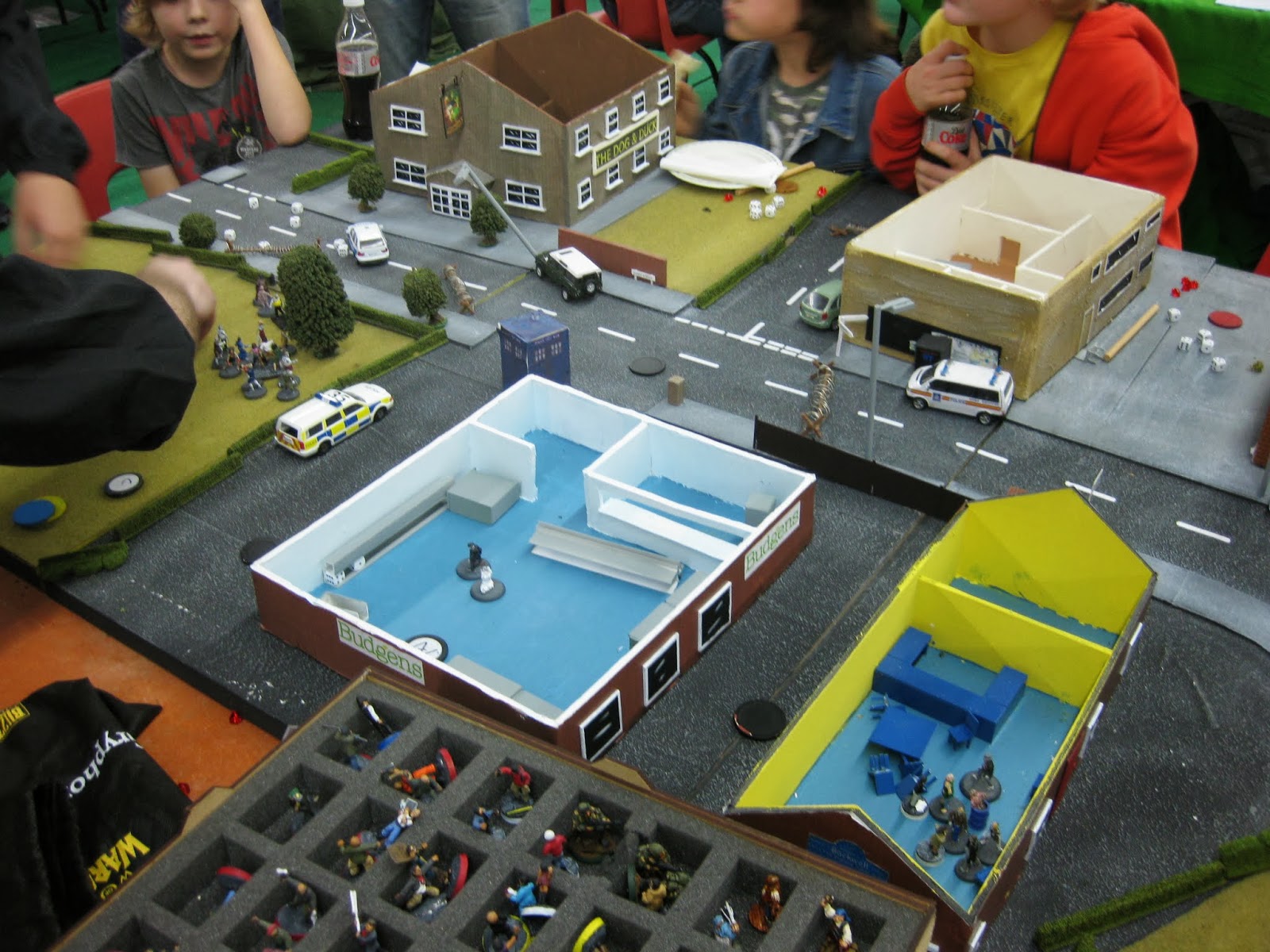 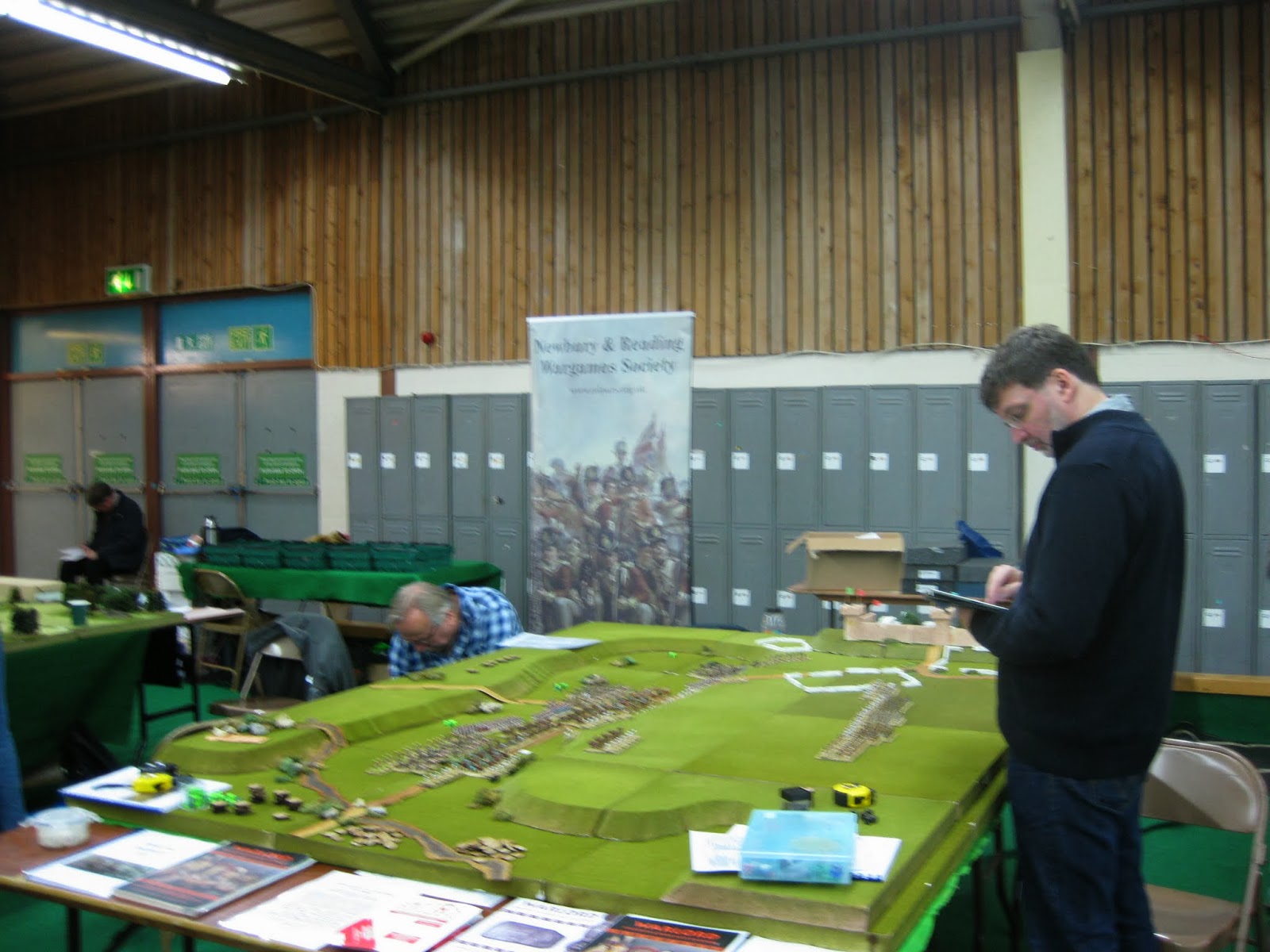 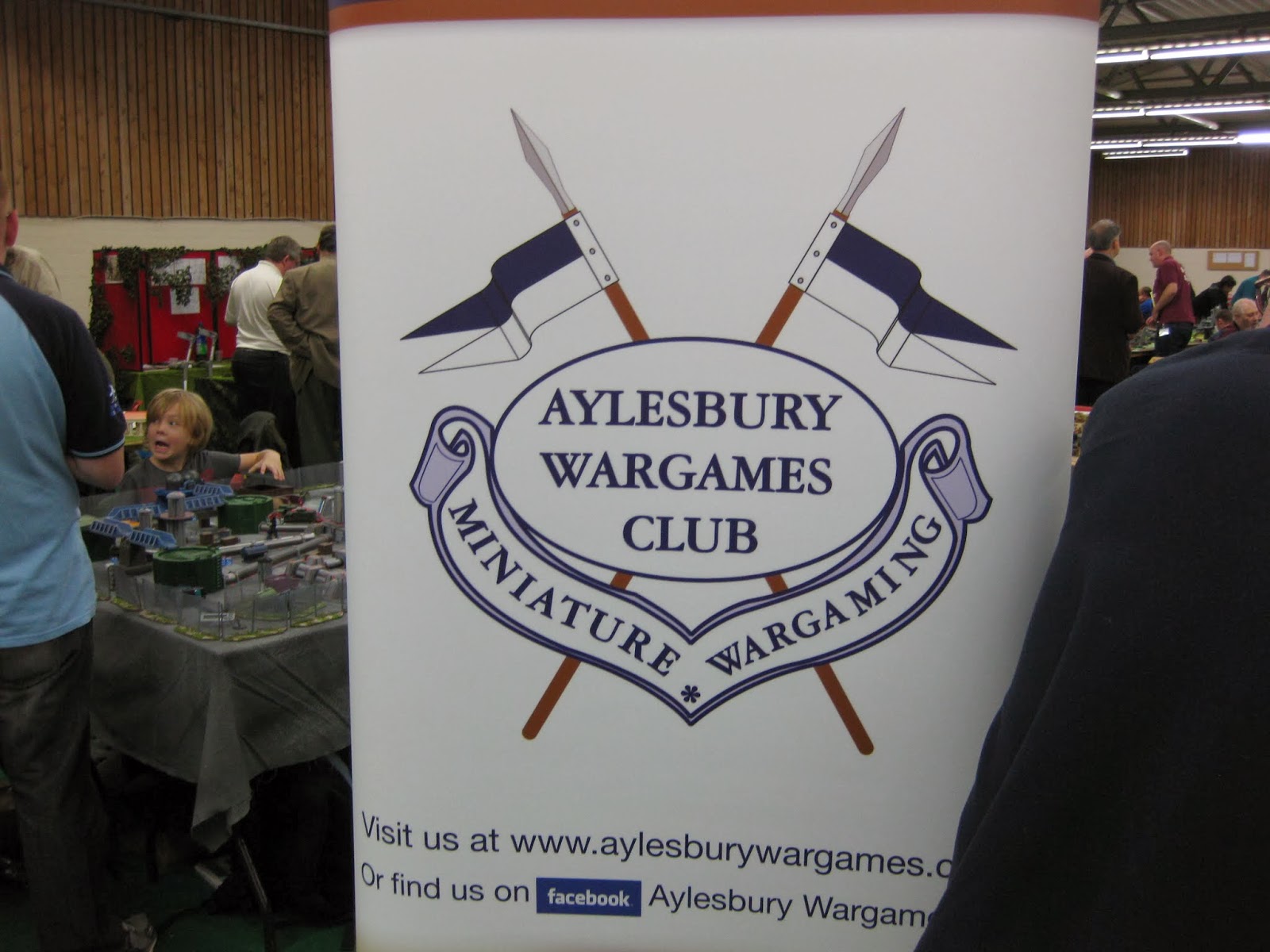 All in all a good show. The drive was a bit of a killer, not helped by horrendous traffic on the way home due to the junction for our rendezvous point to pick up my car was shut, then a wrong turn that put an extra hour on all our journeys!
I'm not sure I'd add this show to my annual visits but only due to the travelling. If it was closer then it would be worth it  just to see the suppliers I normally don't get to see. If I'd did it again then I definitely aim to get their earlier.
﻿