On the last August Bank Holiday Guy kindly hosted a WW2 game using the Battle Group Kursk rules. We were joined again by Andy and Robin. Guy as umpire kindly joined the Soviets (bias!!) as commissar and Andy as commander. Robin and I took the part of the exhausted Germans. We used Guy's collection of 15mm figures.

All the photos are from my phone so are not as clear as my usual camera pictures. Which may be due to how I hold my phone rather than the quality of the camera inside it!

Situation Report (as supplied by Guy)

The Scenario is based on the aftermath of Kursk, (a number of days have passed since both sides claimed victory in the largest armoured clash that the world has yet to see). The Soviet operation Kutuzov has begun releasing the Soviet reserves in a counter attack.

The "Victorious" Germans are now beginning to realise that the cost of the last few weeks has been tremendous in terms of machinery munitions and of course men. Russia is a big place and there are less of them to go round than there was.

The scenario is set around a small natural salient that is defined by a small river. At the head of the Salient is a small hamlet that has grown round the crossing of the mud track that passes as a road around these parts. This back water is were the remnants of the 2nd Panzer Division has been sent to lick its wounds and regroup. A Platoon of the 2nd Battalion of the 304th Panzer Grenadier Regiment ho defend the crossing and during the lull has created an Anti Tank gun Dug out, a HMG Dug out and Fortified one of the Local Hovels. (All count as reinforced cover).

The last few days have been overcast with low cloud and no reconnaissance flights have been possible, but its quiet.... way too quiet.
There is little in the way of support immediately available however Divisional HQ has promised it will mobilise both Panzer and Infantry support should the need arise and has assigned the part of the 3rd Battery of the Divisions Artillery Battalion to be available for fire support if Required.
You are worried as you are well aware that the Panzers were heavily engaged in the previous week and much of what remains is second line.
The German aim is to hold up any attack long enough to allow the reserves to be fed into this sector and engage the enemy. After all you saw how many casualties you and your comrades inflicted so there can not be that many of them left, can there ............
Reinforcements will be fed in on a dice driven system (yet to be defined) but you will start with the Panzer Grenadier Platoon on the table with its supports and also 120mm Mortar Battery (where it goes it stays for the duration of the game)
There is no need for a map, with the exception of the Mortar Battery your deployment is defined.
The Battle
The game was on a 7 x 4ft table. Set deployments for the Germans are:
A German platoon is deployed in the village 2 ft from the Soviet start point. 2 x 120mm mortars deployed in the village on the German base line. A FOO in the woods in the centre.
The Soviets enter on the table edge.
German reinforcements come on from the village on the base line and the road behind the village 2ft from the Soviet start line (the road is therefore roughly central). 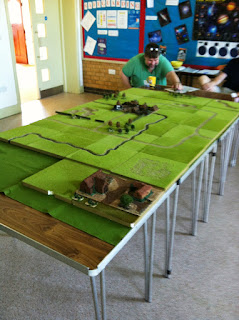 German base line looking towards the Soviet start line. The German platoon is in the far village. The mortars are seen behind the village bottom right.The stream is the dark line on the board.
Objectives
Germans cannot claim an 'all objectives secured' victory.
Special Rules
Roll for command as normal but only add the number of officers on table to the score.
The Soviets come on in 6 waves. 1 wave per turn
The Germans will dice for their reinforcements. This was quite add hock on the day with shouts of fix and bias from the Germans. However it didn't unbalance the game and kept he narrative. The Germans didn't know what they were dicing for or what score they needed which I personally found frustrating. The idea was that we would not know what a reinforcements were, from that view point the system worked perfectly. Roughly the system we used was:
Due to poor dice by the Germans, blamed on not knowing what we were rolling for we switched to rolling 2 dice. 1 for low quality and 1 for high.
The Germans are on Ambush Fire turn 1
Forces
German Panzer Division Points: 1096 points BR: 67 Officers: 6 Army Size: Company
Turn 1:
Infantry Units
Defences
Reinforcements to be diced for:
Forward HQ units
Tank Units
Infantry Units
Specialist Support Units
Artillery Units

Both sides as per the rules needed to allocate the ammo mix to their guns where they had a choice. Rather than list it all the Germans went for a 80/20 mix of AP and HE and the Soviets for 60/40 AP and HE mix.

The Soviets go first as the attackers and call in a katyusha barrage on the village on the stream. Luckily for the Germans they get away unscathed pinning 1 squad.

The Germans made no moves and kept firing destroying the pinned infantry but not pinning any more. The Soviets have to take 2 BR tokens. The average token value is approx. 3 so in theory the Soviets 80 BR was now down to 71.

The Germans took a token to unpin their units. Using the same average for a token their 67 BR was now down to 64. Once either side was down to 0 then game over.

The Soviets new wave arrived while the old continued to shell and assault the village with no great success. The German AT gun however was knocked out. 1 token taken by the Germans.

The Soviet T70s get themselves on to the road leading to the German held village on their base line. The road naturally helped them move faster. There was laughter all round at the fact the T70 light tank is slower than the T34/43 medium tank.

The Germans successfully roll for a reinforcement and bring on the forward HQ Senior officer in a half track and the Luftwaffe officer.

The German FOO can't see anything so no artillery is requested. The other problem facing the Germans is that the Soviets are too close to risk artillery fire even when they appear on the base edge. At a minimum there is a 1d6 scatter with a 10" radius barrage zone which gives a high likelihood of shelling the village. Since we'd already flummoxed the Soviets by surviving the katyushas and the first assault we clearly didn't want to give them any extra help.

This meant that with the AT gun gone the Germans had nothing left they could use to hurt the Soviet tanks so all fire was directed at the infantry they could see. 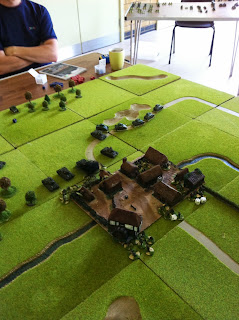 More Soviets arrive and the Germans are still holding the village. The 1st wave T34s machine gun the last remaining German held houses at the front of the village pinning the units in them. The tank riders then charge in to close combat from the previously German AT bunker. Since the Germans are pinned they can't fight back. 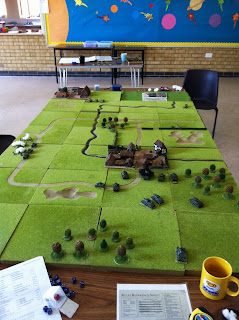 More Soviets turn up in trucks who dismount sending the transport to the rear. 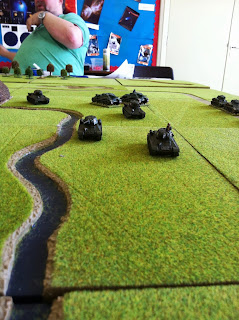 A token for the Soviets this turn sees the approx BR score reduced to 68.

Surprise, surprise more Soviets poor on the board. The newly arrived T34s race up the left flank shelling the village and the pesky Germans at the end of the 'stal,stal,stal' move, the command of choice for the Soviet tankies. 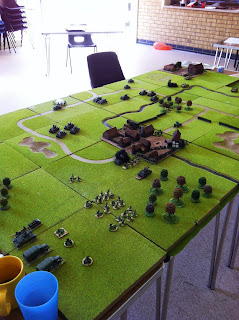 The Soviets take a token at the end of their go to roll a D6 to rally their pinned troops.

Due to congestion on the Soviet start line the last motorised infantry platoon does not come on. The Soviet focus is on the first village and the left flank tank attack. 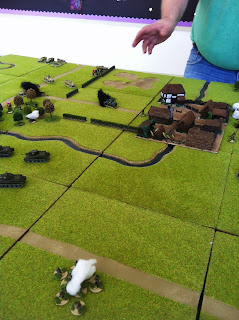 At the end of this final turn the Soviets have taken no objectives from the Germans. Both villages are held, one more strongly than the other. The Soviets have 8 mobile tanks left and a full infantry platoon more than the Germans. The Germans still have 4 tanks left including their Panzer Ace and a PaK40 has just arrived that can kill anything on the board, if it can hit it, which it didn't this turn. Plus they have all their mortars intact to suppress infantry. Having said that the Soviets have their horse drawn AT gun which is good, and they too have their mortars but they are not as powerful as the German's.

So who won. Based on objectives achieved the Germans, but the rules state that when times up the side who has the most BR remaining wins. The Germans had 32 BR left and the Soviets 43. This makes the Soviets the winners.

It was a great game with loads of tension as the Germans didn't know what was coming on when or where. The idea behind the scenario was that the Germans were in exhausted and in confusion being hit by the counter offensive of the Soviets. The design expected the first village to fall quickly and the rest of the game for the Germans made up of disjointed counter attacks as they extracted their troops from the Soviet onslaught. As you've just read this didn't play out like this, although the Soviets still won.

I'd like to thank Guy for hosting, Karl for his unerring luck in winning Beyond the Call of Duty events and Robin for ensuring that not all the German dice rolls were rubbish.﻿
﻿
Posted by Grigork at 15:30 1 comment: