On bank holiday Monday Guy hosted the 3rd instalment of the Battle Group Kursk games series we'd been playing. We did have a break in between games and played a point’s game which I'll write up at some point but this was a return to the campaign in the rule book.

We used Guy's collection which is 15mm with some variation to suit his figures.

The 25th Tank corps led by Colonel Vorodin attacked towards Stalinskoe a branch of the Oktiabrskii state farm with the 362nd Tank battalion in the lead, supported by the 2446th Self Propelled Artillery regiment. These were further supported by a light tank battalion and the 25th Motorised Rifle battalion.

Historically the Soviets charged straight in to the German guns and were decimated.

The game was classed as a Platoon game.

We used a 6x4 ft board rather than the 6x6 stated in the rules but the shift in figure size from 20mm to 15mm negated any major issues.

The Soviets were to have 3 successive waves. The German reinforcements arrived on move 4.

The railway line was replaced on our board by a river, and it was not impassable. The majority of the board was open ground. Since fields had been left at home we classed some dips in the board in front of the farm as soft cover, and difficult ground. 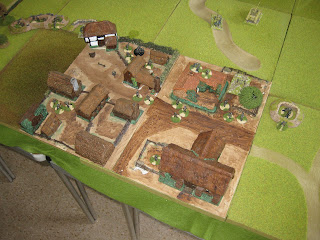 1 Motorised Rifle Platoon in lorries. The scenario had these as tank riders. Guy added lorries because in all our other games we mounted a squad per tank so there wasn't enough tanks for all the infantry.

1 45mm L46 Anti-Tank gun, horse drawn. Not in the scenario but looked nice.

1 Gaz truck with quad Maxim AA MGs. Not in the original scenario

Veteran Panzer Grenadier platoon with HMG support and a medic. Foxholes for all

2 Panzer IVs. These should have been Marders, but the Soviets had been plumped up to compensate.

The Germans played by Karl and Robin set up first and deployed the infantry in the farm buildings with a squad defending the gap between the farm and railway(river) line with part of the PaK battery and one PaK40 and the Marders deployed forward defending the centre and flanks.

The Soviets played by myself deployed the first wave in the centre of their baseline. I decided on no subtlety and just go fort as historically happened. The Germans had more artillery (well had artillery) and the advantage of better kill ranges so the quicker I got in the better.

The Soviets went first and used 'Stal, Stal, Stal' orders to hair 24" up the board and fire a single HE shot at the enemy. I'd armed my tanks with roughly 50:50 HE and AP rounds.

The German reply was to declare that some of their units were on ambush fire orders and interrupted my move resulting in a knocked out T34 and it's tank riders pinned with some casualties.

In return, although still part of my move, my HE shots pinned two Marders. 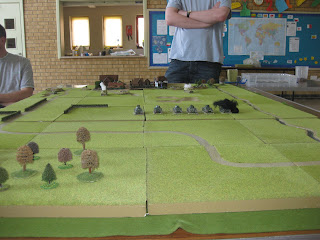 In the German turn proper their timed barrage landed directly on my line destroying the previously pinned infantry and pinning a T34 and dismounting its infantry. The centre PaK then pinned another T34 and pinned its dismounted tank riders. 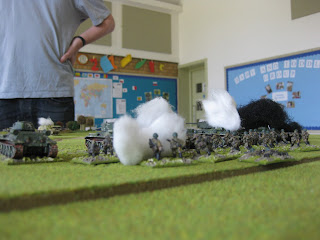 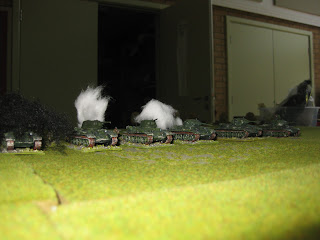 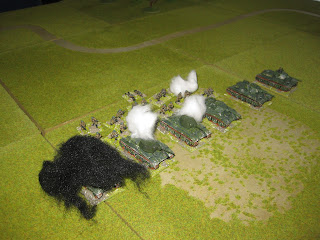 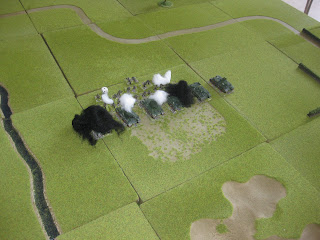 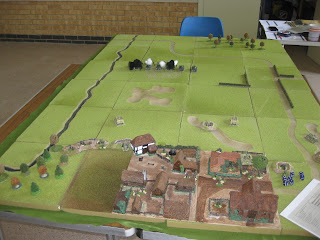 The Germans then take a Battle Morale token and throw a dice to see how many units they can unpin. They succeeded in unpinning the two Marders. Even better they pulled out a mine field token which they played straight away on one of my hapless T34s. The subsequent good dice rolls resulted in another destroyed T34 and suitable pinned tank riders.

I confess at this point that I'm not sure when the mine token was played, although it fits well with the narrative of turn 1 and the photo evidence. My issue is that come turn 2 the Germans play their plane token successfully. This must have been drawn in turn 1, which would mean they pulled two tokens to guarantee unpinning two units, just in case the rolled snake eyes with the dice. I don't remember a plane and mine token being drawn in the same go. I will put this down to the fog of war.

The Soviet first wave had two unpinned tanks and one unpinned tank rider squad. Luckily the second wave appeared on the Soviet base edge and moved up veering to the German right, moving around the stalled first wave.

The Soviet SMG squad from the first wave who were not hugging the ground sprinted for some cover in front of farm, but not quite making it. The surviving T34s moved behind a hedge to cover the advance of the second wave. The command dice had scored high but with so many Soviet units on the table not everything could move. 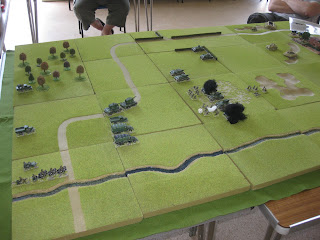 As a final act the Soviets took the opportunity to take a battle morale token and were able to unpin three units, leaving just an infantry squad assessing its future role in the battle.

The Germans successfully called in an air strike and rolled for a fighter bomber. The Soviet AA failed to drive it off and the ME110 swooped on the Soviet Motor Rifle trucks and dropped it's big bomb which scattered nicely. The explosion destroyed a T34 and infantry squad. A second squad newly unpinned took a casualty from mortars and was pinned again. Further insult was added when the Soviets are forced to take a Battle Morale token for suffering an air attack. Any further air attacks do not have this moral affect as it is assumed the Soviets have got over their initial shock.

The PaKs and Marders pinned the newly arrived SU122s. The shots aimed at the T34s in cover had no effect. 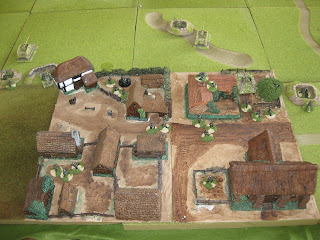 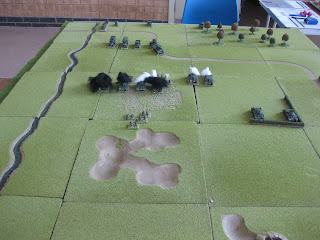 
The third and final wave of the Soviets arrived in the form of six T70s. The command dice were not rolled very well this turn restricting Soviet actions. The light tanks headed for the German right flank, following, and overtaking the second wave .

The first wave T34's successfully suppress and leave pinned the Germans' central Marder and PaK 40, but it took all their shots for this turn leaving one Marder on the German right to menace that flank.

With no further actions the Soviets took a Battle Morale token and rolled to unpin their units. More poor dice saw two SU122s unpinned but the infantry left hugging the ground. 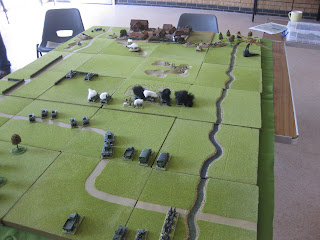 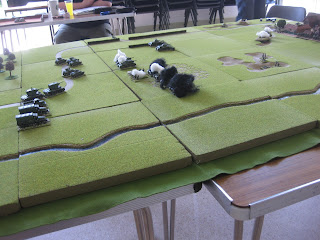 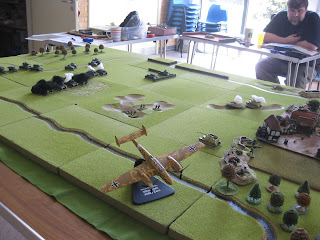 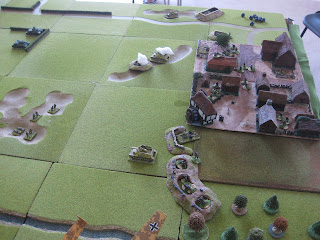 The Luftwaffe returned for another air strike and was ambushed by Soviet AA and driven off. After the Soviet cheering had died down the Germans decided to wait until they could see the whites of the Soviet eyes and placed what forces they could on ambush orders.

More artillery was called in to no affect.

One Battle Morale token later and Marder and PaK 40 are unpinned, ready to be activated next turn.

The Soviet light tank attack on their left advanced with the T34's providing covering fire. The T34s destroyed a Marder but couldn't stop the light tanks triggering an ambush by the left wing German Marder destroying a tank. In the centre the 2 light tanks and the Su122s also continued their advance but all but one  failed to pin or destroy any of their opposition. The unlucky German to be pinned was the retreating Marder in the centre.

The last T34 from the first wave charged the Germans' left wing PaK 40, and fired a HE round at point blank range and didn't hurt a fly. I used my final action to put the AA truck on ambush fire.
So the Soviet phase ended with my main assault elements in full view of a very unsuppressed German defence. Whoops. 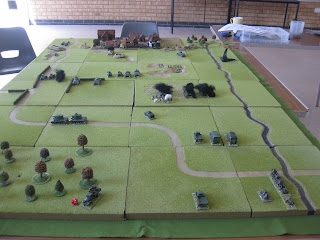 The Germans attacked with their fighter bomber which once again was seen off by what was turning out to be my best unit of the board.

My charging T34 was duly killed by the Pak 40 on the German left. The PaK's then turned their focus on the Su122's ending their game in flames. The next target was on of the T70s with the Su122s. The hit was not a killing blow and the resulting morale test gave the T70 a heroic action. One move and a point blank HE shot later repeated the success of the earlier charging T34 leaving the T70 right in front of a waiting Pak40. The remaining PaK to fire was positioned at the edge of the farm and pinned a T70 on the Soviet left.
The Marder on the left chose this moment to break cover and high tail it the village to rendezvous with the supply truck that had arrived.
The newly arrived Panzer IV's used their actions to move up and replace the Marder on the German left.
On the whole a very successful German turn.


The Soviets were feeling a little battered at this point, but we couldn't let down Uncle Joe so on we went. The KV2's kept crawling up the road. The T34's opened up destroying a Panzer IV. The T70 on the road accelerated towards the last Panzer IV and pinned it. Great result. The next T70 re-tried knocking out the PaK40 it is was currently parked in front of. Ping. Not a good sound. The other T70 tried two shots. Ping, Ping. The Germans at this point began to recover from their rough handling of the Panzer IV's. The last action was once again saved for the AA truck.
Before handing back to the Germans I took a Battle Morale token and unpinned my T70 and infantry.

The German PaK 40 with a charmed life opened proceedings and paid back it's tormentors with knock out blows. Keeping with this theme the Pak 40 in the farm paid back the feisty T70 on the road with blow that caused it to brew up.
In the many token picked up by the Soviets they gained an option to dice for an aircraft next turn.
The Luftwaffe kept having no joy and was seen off once again. Similarly the German artillery was not having much luck.
The surviving Marders gathered around the supply truck to discover the Germans had run out of action to actually resupply.
Finally the Panzer IV was unpinned by taking a Battle Morale token. 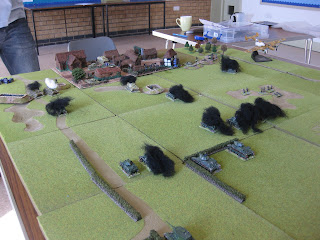 
At this point we called it a day, agreeing that since the Soviets failed to take their objective and most of their attacking force was destroyed then the Germans were the victors.
The Soviets had 5 tanks left at the end and Motorised Rifle platoon and 2 SMG infantry squads, an AT  gun plus the splendid AA truck. The Germans had all their infantry 2 Marders and 3 PaK 40s plus off board artillery. In numbers the Soviets looked like they still had a chance but the tanks were almost out of ammo with no chance of re-supply.
If we'd followed the rules for victory then the Soviets had won as they'd lost as a percentage the least battle morale.
A great game which was lots of fun. The rules worked well in 15mm with out any adjustments.

Work got in the way of playing with the new X Wing ships so before I put them away I thought I'd take a few photos: 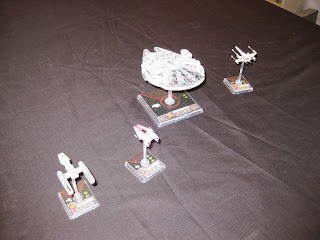 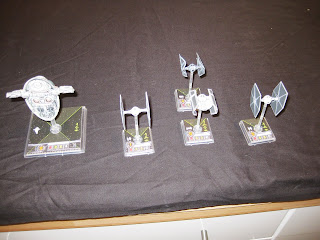