This game follows on from the First Charge at Hill 252.2 scenario. The German 2nd battalion 1st SS Panzer Grenadier Regiment are holding the State farm against the Soviet counter attack. In Battlegroup Kursk this is classed as a Platoon sized game.

The 6x6 ft board was set up as per the scenario map in the rule book, or at least near enough to it. The buildings are from Hovels and the shell holes from Magnetic Displays/Coritani ready painted. The road is by Shell Hole Scenic's who have since sold on their scenery range. The fox holes are by Ironclad Miniatures. The hedges are mainly S&A scenics and the trees are various model railway trees.

The Germans can deploy up to 30" in from the short edge opposite the village, so up to the edge of the field (cut up door mat). The Soviets deploy on the table edge.

The battlefield is open fields, with the mats representing tall crops providing cover. The village is the southern edge of Petrovka, the mat fields the north east of Oktlabrski State Farm. To the east of Petrovka along the Soviet deployment edge is marshy ground fronted by woods.


The objectives are a house in the village, the road junction and the road exit on the German right.

The Germans deployed first with D6 on ambush orders which went to the PaK 40 AT guns. 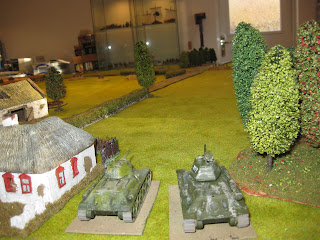 The Soviets started their turn with a 'stal, stal, stal' order and 3 tanks surged forward to be ambushed by the Pak 40's. 3 dead T34's later the Germans were feeling quite smug. 2 of the T34's were carrying infantry which quickly disembarked and became pinned. Soviet retribution was swift as Katyusha rockets arrived pinning 2 guns. 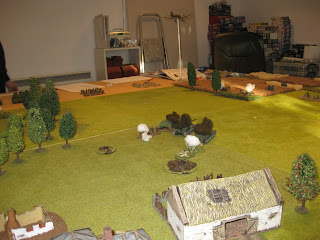 The German infantry opted to stay safe in their fox holes and with the on board artillery pinned or couldn't see anything it was all down to the off table 105mm howitzers and 120mm mortars. The results being 1 more pinned tank and equally pinned passengers who not surprisingly jumped off.


The German's last action was to take a token and roll a D6 to unpin the guns.

'Stal, stal, stal' and the 1st wave leapt forward and engaged the German infantry. The rule is the Soviets give the 'stal, stal, stal' order to a group of tanks and throw a D6 to see how many respond  They then move up to 2 moves and fire a HE shot.

Move 2 saw the Soviet 2nd wave hit the table sloshing through the marsh on 'stal, stal. stal' orders which resulted in a flurry of shots pinning a single Pak 40. 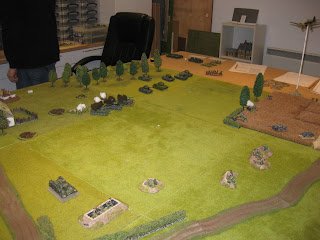 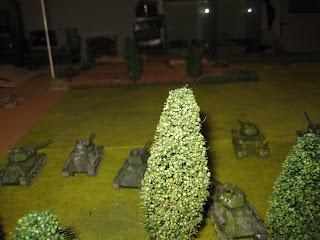 The Soviets take 2 tokens and roll to unpin their infantry.

A timed Stuka strike starts the turn bombing the village and claiming a Soviet infantry command reducing the Soviet officers from 3 to 2. Command which decides how many units move is calculated by rolling 2D6 for a platoon game and adding the number of officers to the total. The Soviets with the worse dice could only ever move 4 units rather than 5.

Next came the artillery and mortars pinning 3 Soviet tanks of the 2nd wave and the recently unpinned 1st wave infantry unit.
Artillery over the Germans decided to launch an attack on the T34 closest to the fox holes. Passing their close combat test, and then throwing the right dice for a successful attack the Soviet tank was disabled. The added bonus to this heroics was that this tank turned out to be the Soviet forward HQ with their senior officer. Now the Soviets with the worse dice score could only move 3 units each turn. On average dice it should be 7 plus the surviving officer making that 8 units to activate. 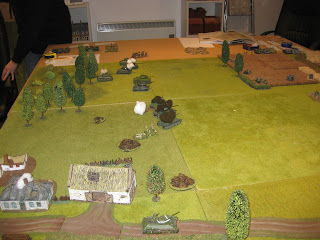 The Soviets take another counter for their destroyed tank. The German take one to unpin their AT gun.

Soviet 3rd wave arrives and revenge was dished out. The 1st wave surviving tanks advanced and machine gunned the fox holes pinning a German MG team. The 3rd wave T70' on the road were given a  'stal,stal, stal' order and move and fire on the heroic tank killing squad and pin it.

The 2nd wave were ill served by the command dice but 3 tanks moved and destroyed 1 AT gun and pinned the remainder including the artillery observer. Bad news for the Germans as this robbed them of their artillery support which had been vital so far.

The Soviets took a single token and unpinned their tanks. The Germans also took a token as they no longer held the crossroads without the enemy being within 10".

German reserves began to arrive with a StuG III squadron depolying from the road behind the infantry. They immediately opened fire only managing to pin 1 T34. This meant the infantry squad had to give it a go and were rewarded with a pin and dismounting the Soviet infantry pinned.

The lack of command dice resulted in a German decision to forego artillery this turn and use the dice to allow the AT guns to reproduce the magic of their first turn. Unfortunately this lead to disappointment and forced the German infantry squad to assault the nearest T34. Again disappointment as the tank survived. 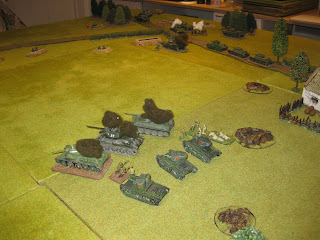 The Soviets focused their attention on the PaK 40 battery. The T34 charged by the German infantry last turn served past them and ran over the western most gun, which survived to everyone's shock. Very good German dice.

Next the T70s charged the remaining Pak40 but failed to destroy it. 3 T34's are brought up and finally it's pinned. Meanwhile an unengaged colleague moved through the crops to outflank the Germans. 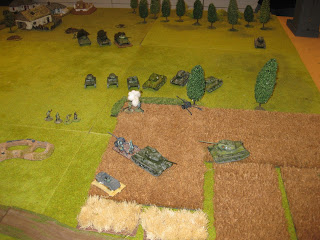 Having been successful in the eastern part of the battlefield in the west a T34 took out a StuG. 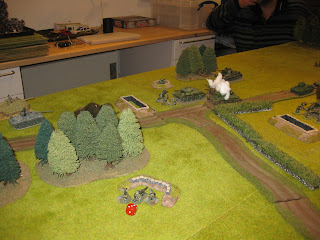 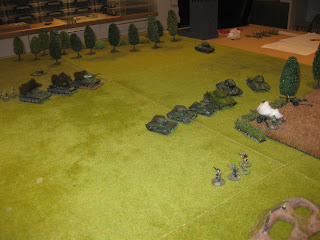 Final act was to take a token to unpin the tanks at the cross roads.

Now was the time to use the off table 88mm shots. 5 shots later and 2 destroyed T34's. Next the surviving AT guns opened up destroying 1 T70.  3 tokens taken by the Soviets. 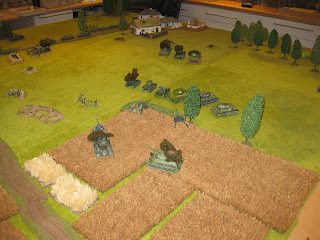 I then moved the Forward Observer out of harms way and brought on the last reinforcement, another StuG squadron arrived in the centre of the table.

The infantry squad that had charged the right flank T34 now charged its' tank riders scattering them to the wind. Another Soviet token taken.

The right hand StuG's select their targets, with the infantry now out of the way, and 4 shots later 2 T34's are down. 2 tokens for the Soviets. 5 in total. 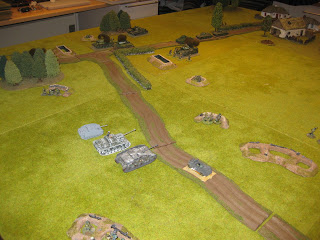 The final act was to take a token to unpin the AT gun. 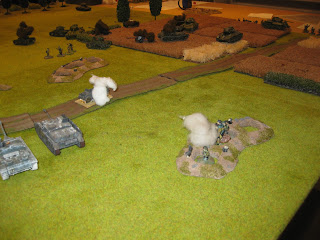 The 2nd and 3rd wave Soviet tanks on the eastern side of the field moved in for the kill and finally finished off the PaK 40 battery. The eastern road exit objective was in their sights.

Nothing was pinned so no tokens needed to be taken.

The game was close. Despite the success of the 88's the Germans were still outflanked on their right. The Forward Artillery Observer was pinned so that meant no artillery again. The left flank StuG's opened up and took out a T34. 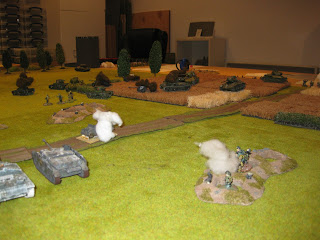 Last but not least a decision is taken not to unpin the Forward Artillery Observer and the infantry command.

The Germans needed to be broken this turn. The Soviet 1st wave infantry, forced to debus in the first turn, fired at long range at the Germans at the cross roads forcing them to be pinned and they needed to be destroyed to win the objective.

Next the lead T70 fired at the proven tank killer infantry. A casualty was caused forcing a moral test and a 6 was rolled. Heroic action test was then passed and the Germans charged at their aggressor and claimed a second tank kill. The Soviets draw an aircraft token to play next turn. They were surprisingly smug about that.

The eastern T34's swung around the flank while the T70's took out the pesky last remaining PaK.


For a change there was no need to take a token.

The German right hand StuG squadron moved to the right to engage the flanking T34's and the PaK killing T70.  The subsequent shooting resulted in 1 T34 killed and it's tank riders pinned but the T70 escapes harm.


The left hand StuG squadron engaged the remaining 1st wave T34 and destroyed it.  Since this was done with the shots from the first StuG it's surviving partner moves to the cross roads to deny the Soviets their objective. The infantry squad who had been doing this were now down to 3 men so could easily disintegrate under further fire.

The heroic German squad tried it's luck once more and attacked the next T70 (Valentine) in the Soviet column bringing their tank tally to 3.


Since there was 1 command dice left the infantry MG dug in on the left fired Area Fire at the woods pinning the Soviet infantry squad lurking there.

Feeling daring the Germans risked taking a token to  roll a D6 to unpin the Forward Artillery Observer, the infantry squad at the cross roads, infantry command and the 80mm mortar. Good dice meant they were successful.

Well having survived another the Soviets rolled poor command dice, the impact of losing officers was now being felt. All hope was on the Sturmovik to unleash hell and finish off the stubborn Teutons. The trainee pilot however failed to pin or destroy anything. The Commissar will be having him met when he returns to base! 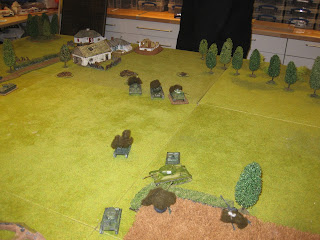 The T34 fails to hurt or pin the German right flank StuG's. The T34 contesting the eastern road exit also failed to destroy the German mortar team but pinned them again. The remaining T70 (Valentine) in the road column peeled left and fired on the pesky German tank killers. The Germans chose not to take casualties but to fall back pinned. The Soviet player then got to move the squad 10" back towards the nearest cover.

As the last action the Soviets decided not to risk taking any tokens to unpin their 2 infantry squads.

Wow, another turn surviving. The right flank StuG's fired on the flank of the T70 (represented by a T26) which resulted in successful kill and with that the Soviets drew a token. Thus ended the game as the Soviets had reached their battle rating of 61 and the morale of the Soviets forces broke and they began to withdraw.

Victory to the Germans. I now revealed to the Soviets how close the game was, as hadn't let on that the Germans with only 40 points were themselves close to breaking. The Soviet poor show last turn saved the German day.

All that was left to do was take pictures of the board. 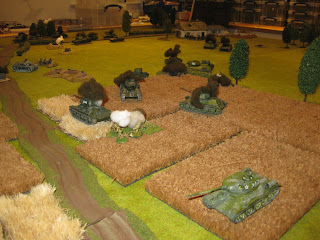 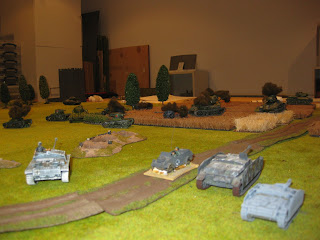 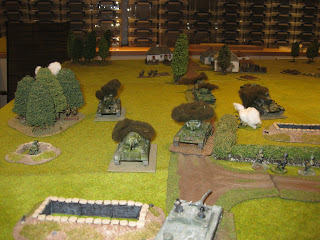 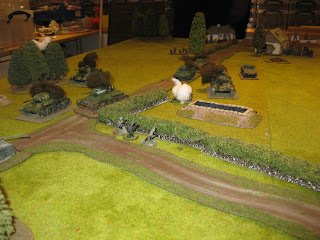 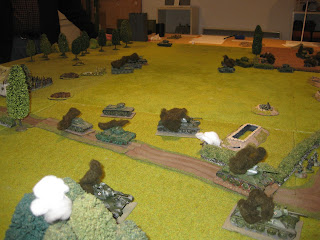 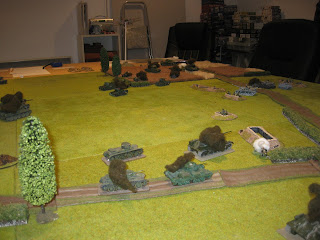 Great game, although I am biased as I was the winning general, but all agreed they'd enjoyed themselves  Throughout the game the Germans enjoyed very good dice and the Soviets the exact opposite, definitely a game to replay. The Germans didn't get to use their artillery as decisively as planned, and the Soviets need to be more careful of their officers.

We didn't get everything right the following points need to be remembered for the next game:
Would I play this scenario again?