I had 3 Imperial players and 2 Rebel players for my X Wing game.

The Scenario
Han in the Millennium Falcon escorted by Wedge Antilles and Porkins has used a smugglers route to sneak in to an Imperial interdicted star system. All he has to do now is sprint for the planet Colwyn and deliver the vital supplies to the Rebels there.

The Forces
119 points per side. 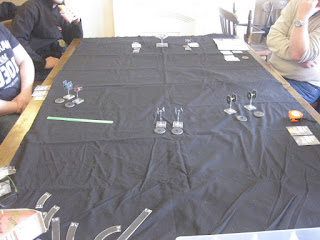 As always X wing is a fun again and everyone enjoyed themselves.
Posted by Grigork at 10:57 No comments:

This Sunday I'm putting on an X wing game for the club, the game is Napoleonic 15mm. In preparation I have finally put all the ships into foam travel boxes, which are a mixture of KR Multi Cases and Figures in Comfort. The mixture of boxes is not by design, just what I have. The KRs were  purchased for my Full Thrust fleet and transporting 28mm skirmish forces for whatever period. I cannibalised the skirmish box taking the flat sheets to use to provide tops in my oldest of Figure in Comfort boxes. Now that is all done I can take any or all of my Star Wars toys to game.

My KR boxes are the cardboard versions and stack nicely, my Figures in Comfort are plastic cases which are sturdy but don't stack so well when you carrying them. Clearly if you use the handles on the plastic cases there's no problem.

So the gear is ready what to play. This is the question bouncing round my head. I've still to sort out the cards and assemble the manoeuvre dials which may dictate which ships get left out.

I'll have 4 to 8 players to cater for. If you've not guessed I provide all the ships and umpire. We've learnt from previous X wing games and other aerial combat games is that in an afternoon's play everyone loves a grand melee.

Personally I like a bit of a story to a game to give it purpose and that then gives me the ideas of which ships to use. Another consideration is that although I may know Star Wars backwards and it's canon and now non canon expanded universe not all my players do. So the ships need to familiar.

My thoughts so far for a scenario are:
Han and Chewie in the Falcon leading a small group of freighters via an old smugglers route to a planet blockaded by the Imperials. There aim is to get past the blockade and deliver much needed supplies to the rebels on the planet. They will be supported Luke and some of Rogue squadron.

The Empire is stretched thin by the rebellion and is using mercenaries to assist with the blockade and they are watching the smugglers route. They can call on Imperial support. That may include Darth Vader.

I think that gives me enough background to play each faction. I just need to make the forces balanced or not (queue evil umpire cackle).
Posted by Grigork at 09:01 No comments:

The Scenario
The Soviets held a fortified line anchored on 2 hill in front of Ponyri. Their aim to stop the Germans breaking through.

Soviets - Ian, Alex and Dickey
1023rd Rifle Regiment
Anti tank regiment
122mm Howitzer battery
Katyusha battery
Sturmovik plane (should have been a LA-5N but we didn't have one)

Once we'd sorted all our errors out our dice for both sides was appalling. We couldn't spot. We couldn't hit anything. Rockets deviated in to unoccupied areas. The planes turned up on turn 3. The Sturmovik saw off the FW190, and in turn was seen off by the German AA. Both sides therefore failed to rain death from above. In the last 2 turns things suddenly changed.

The Soviets on the target hill were near 50% casualties from concentrated artillery, nebelwerfer and mortar fire requiring reinforcement from the other defended hill. After repeated failures with trying to lay a proper covering smoke screen the Germans chanced a dash across open ground and the 1st battalion was cut down but still going forward as the game ended.

On the whole an unsatisfactory game all round, but one of many 'if only' moments. Now that we've dissected where we went wrong, among which included needing to know the rules better, I'd play it again. The correct size board and the easier ability to call in artillery would have given us the game we expected where artillery did the hard work to enable the infantry to win the objective.

On a positive the company was good and the game looked great.
Posted by Grigork at 16:50 No comments:


Dave commanding Viking and Pete with Strathclyde Welsh fought it out last Sunday. The Welsh trashed the Vikings. 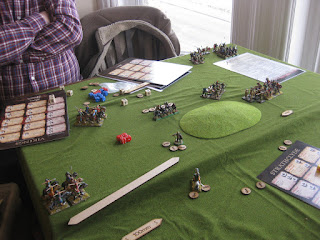 All the figures were Petes'.

I caught up with Dave later and he commented that both he and Pete agree that the rules favoured the Strathclyde Welsh. Specifically Pete had the majority of his units off board that allowed him to earn more fatigue tokens to place on the Viking units which they themselves had no real counter. These 2 sides will be fighting again.
Posted by Grigork at 09:14 1 comment: