I eagerly accepted my friends invitation to pop over and play a game of Dead Man's Hand escaping the mess at home. We'd played Warhammer Historical's Legends of the Old West a lot and love it and we were both interested how these rules would compare.

Legends of the Old West has a lot more character and a lot more detail than Dead Man's Hand and naturally is therefore a slower game but richer in atmosphere. For example Legends of the Old West gives your characters special attributes and you have a choice of lots of weapons. Legends of the Old West also caters for campaign play where you can build up the size and strength of you posse/gang etc. Dead Man's Hand I believe is bringing out campaign rules but the core rule book is a fun and fast game of gun fighting (or fisticuffs which we didn't get to try). If you like character you can still create story lines and name your figures but the play is simple. The game uses cards to dictate initiative and cards to create atmosphere by playing the action written on them to affect play and results are decided by dice. As with any good game you still need to think tactically in the movement of your figures but also in the use of your cards to gain maximum advantage.

From  the above you can tell I enjoyed myself. We played for an afternoon and got 2 games in with a result.

Game 1 The Stranger
I played the drunk bad men about town against the lone good guy. The scenario dictated that the sides set up 20cm from each other and the terrain needed to be 20cm from them. Quite straight forward we then dealt the cards and followed the turn sequence. The special rules were that my guys had a minus on their shooting I think because they were drunk, this vanished once a character was down.

Game 2 Revenge
We played the scenarios in the rule book but I can't remember the exact names so my scenario titles just give the gist of the game.

Since the stranger whooped my boys the family return to town looking for some pay back. we got adventurous with 7 figures each. Both sides had a boss, a gunslinger and dudes (the rules phrase not mine). The bosses started in buildings letting their men sort things out, they activated on the death of one of their side.

We had to deploy on 4 groups, 20 cm  a part from the opposite side and the boss. 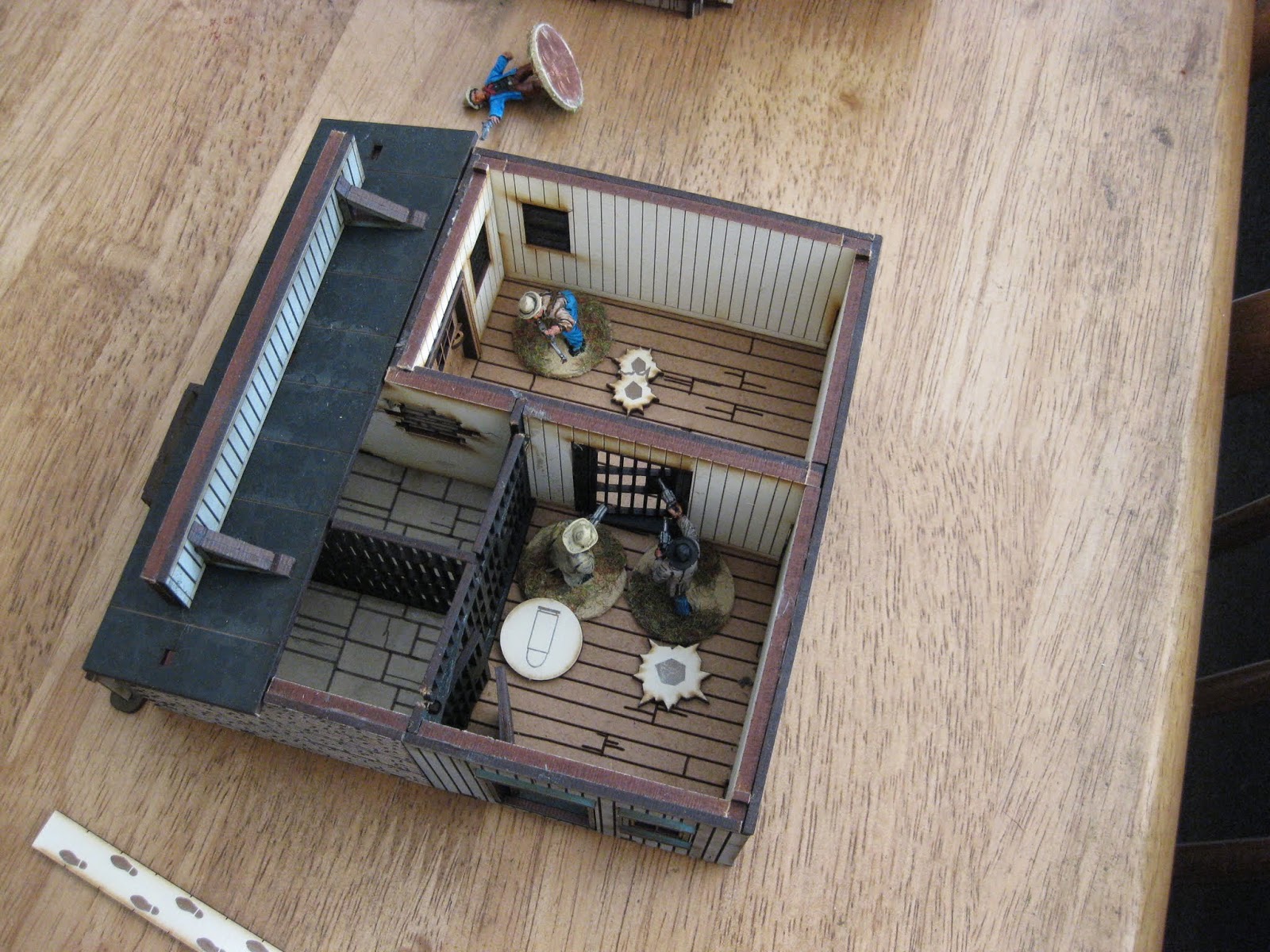 The pictures don't show all the actions but the game cam down to the wire. We actually thought it had finished the turn before in the Marshall's office with the death of the goody pistolier. In the heat of the action we'd applied close range pistol bonuses to my chap, but when I took t he triumphant photos of my victory I spotted the rifle. The pistolier lived and to our surprise so did everyone else in the room when continued the game. The next shootout was my boss and the gunslinger against 2 goodies and the stranger. The stranger was the main target and survived due to his higher number of under fire tokens required to take him out.

The finale was downtown where I had already killed a goody outflanking the building site so I was now 3 on 1. It took all 3 men shooting to take the last man out and a victory and revenge for the ruffians.

Great stuff. We found that the cards with actions added the flavour of the period, where Legends of the West  used character attributes. If we'd played this 2nd game using Legends of the West it would have taken us all day (we're not quick) so I liked the speedier pace. Another bit of flavour as I was playing the baddies I could declare I was cheating and gain the initiative by a mechanism I forget. I used it to get the last kill.

It's great to say I played a baddy, cheated and won. All in character!

After much thought I will reward my packing efforts of today by going to Triples Sunday.

As consultation I will try and finish my post on my first Dead Man's Hand game at a friends. I had a great time and I am now considering picking up a copy. Legends of the Old West is still a great set of rules with more character but I liked the ease in setting up a game with Dead Man's Hand.
Posted by Grigork at 07:32 1 comment: