Battle of the Brandywine 1777 refight

The AWI game on Sunday has been announced as the Battle of Brandywine, also known as the Battle of Brandywine Creek September 11, 1777. This will see the American army of General George Washington and the British army of General Sir William Howe slug it out.
I need to get my share of the Americans ready and refresh myself on the Black Powder rules.

Preparing for 1st game of the year

My first game of the year will be with the Conwy Wargames Club. One of our many members called Pete is organising an American War of Independence game in 28mm using Black Powder rules.

..... Me! I spotted my wonderful profile in the Lokhivitsa Campaign article. I'm in the overhead picture middle left being comprehensively beaten by Juho from Finland. Great game and to sound like a broken record I musty finish the AAR for all 3 games over the weekend!
Posted by Grigork at 09:08 1 comment:

2015 saw a different wargaming rhythm than previous years since I'd moved from England to Wales. My usual shows were now quite a drive away rather than no more than 1 hour, and new shows came in to range. I didn't manage to fully explore the new show options but I'll get round to it. I didn't expect to paint much and managed nothing, but did manage lots of work on the house. I had expected to finish the Wargames Eyrie but that will now be in 2016, but not necessarily the full vision but a working version. The move meant I was now out of range of my good gaming buddy for our monthly 1 day games, but we did manage a game. The move did bring me back to some old gaming chums and I attended all the Conwy Wargames Club games except one.

Places Visited
We took an early holiday knowing the year was going to be busy, plus we did a lot of exploring of the new surroundings. Not much to inspire a wargamer, hence few blog photos. Conwy castle being the most military related and I really enjoyed revisiting this old haunt and this time it was so much more informative. A great game could be made of Welsh rebels sneaking in to the castle and taking it by surprise, as actually happened.

Games played - 17
I had 14 games with the Conwy Wargames Club. 13 as part of the monthly meet and 1 day game. The other 3 were at the Battle Group Campaign Day.

Battle Group Lokhivitsa Campaign weekend
3 x Barbarossa games . Another set of AAR's I need to finish and publish. It was a great weekend and I won a game. Even better it was against my old gaming buddy Guy. 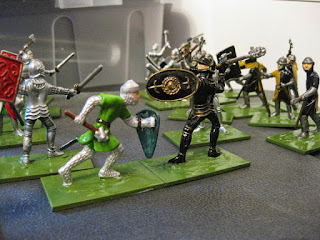 Books Read
This year I managed to read quite a lot of historical books which makes a change:

Santa gifted me a nice haul  of miniatures and books both hard copy and on Kindle.

I received the latest(ish) X Wing Miniatures releases - I am now only 1 wave behind and a Imperial Raider short. I am now also caught up with the Star Wars Armada. The Star Destroyer is huge. I'm really looking forward to playing with these. 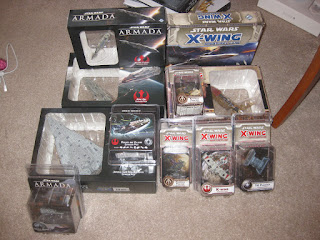 My historical book haul was pretty good, with Santa surprising me with some excellent choices. Missing from the picture was a late arrival which was Michael Embree's book on the 1866 campaign in southern Germany. Both Embree books are full of lovely illustrations and the 1866 book has a lot of uniform plates. I've jumped in to reading 'The Ottoman Endgame' which I'm really enjoying. 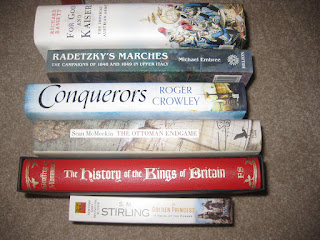 On Kindle my wife, sorry I mean Santa chose the lasted John Scalzi novel I hadn't noticed was out in 'paperback'  and some great pulp Sci fi and Zombie books.

Happy New Year to you all
Posted by Grigork at 10:51 5 comments: