For May's Conwy Wargames Club meeting Pete re-ran a Fall of the Reich scenario we'd played before called 'Holding Dolegin Station' but with the right troop types this time round, but with a smaller board to speed up the action.

The Soviet start the game with an assault force whose aim is to breakthrough the line to allow the massive reinforcements to follow up.

This is a narrative game rather than a balanced one.

The Battle
We used a smaller 6x4 board rather than the 8x6 in the scenario. D6 Germans can start on Ambush Fire and the Soviet first wave starts 20" in. Reinforcements come on their sides base edge.

3 mine fields
6 x off  table 88mm shots
AT barricade 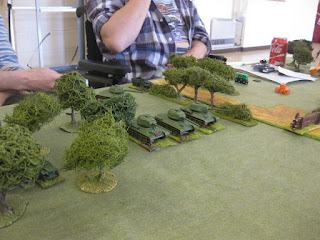 Fun gun as always. The katyusha strikes in the first round slowed the game down before it began as it took us a while to remember the rules then work it all out. Like last time this should be a day game, but hat's off to Pete putting it on last minute.

I'm determined to replay this scenario and get it right.
Posted by Grigork at 11:13 1 comment: