The following sections in italics were given to us before we arrived on  the day to help us plan our forces.


Historical Background: Ukraine– September 15th-16th, 1941
On September 12th, 1st Panzer Group launched an attack from its Dniepr river bridgeheads directed north, to cut across the rear of the Russian South-West Front, currently defending the Ukrainian capital of Kiev. This attack formed the southern arm of two pincers aimed at encircling the Russian forces holding Kiev - 600,000 men in total. As Von Kleist’s panzers attacked north, so Guderian’s 2nd Panzer Group was fighting its way south as the northern pincer. The two powerful Panzer Groups would meet at the town of Lokhvitsa, some 180km west of Kiev.
After the successful initial breakout from the bridgeheads, Von Kleist’s panzers made rapid progress, and it was only then that the Russian commanders saw the imminent danger from the two German attacks. In desperation to save South-West Front, any available forces, some only just unloading from trains, were thrown in the path of the Germans to stall the attack and buy enough time for an effective defence of Lohkvitsa to be constructed.

Desperate Russian efforts to prevent the encirclement failed and the two German panzer groups linked up at Lokhvitsa on September 16th, sealing in all the Red Army troops and bringing about the largest Russian losses of 1941 as, over the next 10 days, 600,000 surrounded men were forced to surrender.

Army List Restrictions
Axis:
The Axis forces are attacking, and cannot take any Defences, on either day. All the normal army lists restrictions apply. There are no additional restrictions upon the German lists.
An Axis player can, if he so wishes, bring two different battlegroups, one for day 1 and one for day 2. Rosters and models must be supplied for both.
Luftwaffe Air Support: The Luftwaffe is very active in support of the panzer groups. For each round of games, 4 extra Timed Stuka air strikes will be randomly distributed to German players. Models will be supplied for this.
Russians:
On Day one, the Russians are conducting desperate counter-attacks by any available forces. No defences can be taken. There is a restriction on KV tanks, but no other restrictions on the lists apply.
On day two, the Russians are now defending Lokhvitsa area itself. They may include defences in their battlegroup rosters, as per the normal rules. The player must supply the models for any defences he takes (where required). All the normal army lists restrictions apply. A Russian player may use two different battle groups, creating one for day 1 and one for day 2. This is optional, the same battlegroup can be used on both days if it does not include any defences.
Restricted KV tanks: No KV tanks may be included in a Russian player’s battlegroup(s). These heavy tanks were very limited in numbers and as such they will issued by the campaign referee. For each round of battles, two KV-1s and one KV-2 will be issued to the Russian side, one to three randomly generated players. These can be used in the battle as normal and give the player’s battlegroup a +3 BR bonus. A model will be supplied for this.
These are the same vehicles for each round of battles. If they are destroyed (breaking down doesn’t count) in a game then they cannot be used again over the weekend and will be removed for future battles.

DAY 1 – ATTACK/COUNTER-ATTACK VARIANT
SITUATION REPORT:
The German offensive has caught the Russians by surprise, and realising the threat to the defenders of Kiev, any available forces are being redirected into the path of the German advance to stall them, whilst behind them, more forces are digging in around Lokhvitsa itself. The Russian commanders have instructions to attack immediately. The German commanders must push on towards Lokhvitsa with all speed.
Scenario Type: Meeting Engagement
Scenario Size: 450pt Platoon game.
TERRAIN:
The terrain will be provided. You will be assigned a random table to play on. Please do not adjust the terrain.
VICTORY:
The side that loses all its BR is defeated, and his opponent wins. In the event that neither side has broken, the side that is closest to their break point has lost. Inform the referee of the size of the victory (see Briefing), Massacre, Solid, Marginal or draw.
DEPLOYMENT SEQUENCE:
1. Place Objectives
Place a single objective in the centre of the table. Neither side can win an ‘all objectives secured victory’.
2. Place any Pre-Registered Target Points and Timed Barrages
Both sides should note down where their pre-registered target points are (if they have any). They should also note down the location and turn for any timed barrages or air strikes. Also, remember to chose ammo for your armoured vehicles.
3. Deploy Reconnaissance Force
The player with the least Scouts (or the loser of a D6 roll-off in the event of a tie) places all his Reconnaissance units. These can be anywhere in his half of the table, but not within 10” of the centre line. The player with the most Scouts then places his Reconnaissance units, as above.
4. Deploy  Initial Forces
The player with the least Scouts then deploys 2D6 units, freely chosen from his battlegroup,  anywhere within 15” of his table edge. The player with the most scouts then deploys 2D6 units, as above.
5. Out Scouted
The side that is out scouted must take a counter.
6. Reinforcements
Any units not deployed at the start of the game are reinforcements. For both sides, from the start of turn 2, 2D6 units arrive from each player’s table edge. Roll at the start of each player’s turn until all the forces are on the table.
7. First Turn
Each player rolls a D6 and adds the number of Scouts. In a tie, re-roll. The player that scores highest takes the first turn.
Notes:
The game is played along the length of a 6x4 table.
The weather is again fine and sunny, so do not roll for weather, aircraft will be available all day as normal.
The impartial referee(s) has the extra reserve forces. The Russian’s 3 KV tanks and the German’s 4 timed Stuka attacks will be assigned to tables randomly.

My first Soviet opponent was Juho, one of the trio of gentlemen who'd traveled over from Finland for the event. 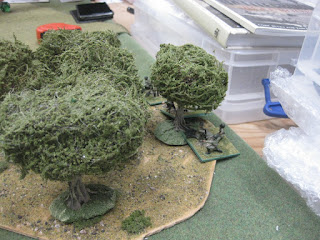 I really enjoyed the game, Juho was a great opponent and his knowledge of the rules was impressive. It was hard fought and I found it tactically difficult. I'd never faced an opponent before who used the reserve move order so that was interesting. My lack of artillery was telling, made worse by failing the communication roll repeatedly.
Posted by Grigork at 13:15 2 comments: