Mel hosted a WW2 naval game using his ships and using some rules from the US called Flaklighter 2.

We hadn't played the rules before so we were all interested to see how they would work. I hadn't played this kind of naval at all, and the our experienced players hadn't gamed WW2 coastal for 3 years.

The scenario was simple the German schnellbootes were to attack the British convoy and the mixed Royal Naval and US Navy force were to stop them.

I played the Kriegsmarine, Dave the Allied interception force and Tony controlled the convoy. 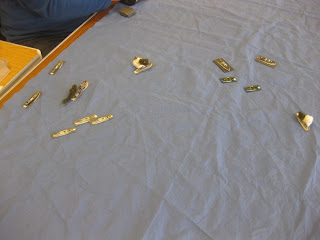 I enjoyed the game. I haven't played naval games for decades, the closest I've come to it is playing Full Thrust space combat and that was a few years ago. To do the rules justice we'd need to play them a lot more. Personally I'd need to translate all the measurements in knots/yards to the playable value in inches. I wrote these down as we went along - using the true values gave atmosphere but as it was all new we were constantly converting them to fit what we were measuring on the table. In the heat of action some players did get confused with 10 knots = 10" when they should have been moving 3.33".

The experienced players were not won over by these rules. It was decided that the next game we'd use a more familiar rule set and compare them with these.
Posted by Grigork at 18:10 1 comment: