It's been a busy week so I think a 6 hour return trip tomorrow is a no no for me. It's a shame as I love the show. On a positive note I've decided to give WMMS a go and it's next weekend and closer.
Posted by Grigork at 21:01 No comments:

Dave put on a modern 20mm skirmish set in Africa around 2010 using the Force on Force rules. I haven't played these rules but I'd heard good things about them and I was interested to see how they played.

Unfortunately Dave apologised that he hadn't had a chance to fill out a detailed scenario but gave us a broad brush idea. The game's objective was to run through the rules to see how they worked so this wasn't a problem.

The figures are mostly Liberation Miniatures and the vehicles are mainly pre-painted models you can buy.

The Western backed government had been overthrown and the US had gone in to support it. The legitimate government's enclave centred on the country's main port had been coming under sustained artillery fire. US Marines are dispatched to silence the multiple rocket launcher hampering the build up of government forces.

The coup had been supported by the majority of the army and the artillery and platoon guarding it were regulars.

In my head the country was Tangerine (I'm pretty sure I've read a very good blog about this imagi-nation  so apologies for nicking the idea). Again in my head this is a country that at one time or other in its history had parts if not all conquered by Arabs, Portuguese, Spanish, French or British. Main export after slavery was abolished would be various types of oranges. The main religion of the people is traditional based on spirits and ancestors. The coup backed by the army called for a return to traditional values and a more equitable distribution of the new found mineral wealth.

The Umpire believed that the US squads could take the village their better training and weaponry out classing the defenders. Personally I think my tank would have something to say about that.

I enjoyed the game both the rules and the company. As we were all either new like me or very rusty the game was slow moving as we working through the rule mechanisms. The ability to react multiple times to your opponents moves worked well but I found I was easy to get lost in the turn sequence. However to my mind it matched the quick reactions and firefights in modern war. The dice for quick reaction for each fire attempt and the combat mechanism I liked and was very simple, although different the other games I play. The use of different dice types to represent skill and morale worked and you could see how it gave the US Marines the edge. I definitely felt that cards with stats and weapons for your units and other relevant information would have been useful to mark impacts and aid quick look up of dice values.

I'd definitely play these rules again. Apparently if using militia/insurgents you get a very different game.
Posted by Grigork at 10:03 3 comments:

Email ThisBlogThis!Share to TwitterShare to FacebookShare to Pinterest
Labels: Force on Force, Modern

I am really looking forward to the new addition to the Battlegroup rule sets. I have never played early WW2, late war being my first love and Battle Group Kursk introduced me to the delights of mid war games. From a collection point of view I have inherited the beginnings of a BEF force and Blitzkrieg Germans. It will be interesting to see where I need to fill out the ranks. Of course there is always the debate about do you use any British or German troops, so long has they have the right weapons or do you invest in new accurate figures. Challenges, challenges, all part of the fun of collecting of course. My main issue is I am drawn to the armies I don't have mainly the French and Poles. Which one to invest in first!

Well my pre order is on with Plastic Soldier company so I just have to wait. I do like that with this supplement they are giving away with the pre order a pdf version of the rules.
Posted by Grigork at 10:08 1 comment:

I'm not sure I'll make it this year. It's 3 hours away now rather than 45min. I'd planned to stay over with a friend and get a game in but we'd both thought the show was on a Sunday, oh well I'll see if I can get this plan sorted for Partizan.

If I'm feeling fresh from the house renovations I may give it a go. I am looking forward to seeing it in it's new venue and I love the participation games.
Posted by Grigork at 19:16 No comments:

All going well there will be a Force on Force game on Sunday. I'm looking forward to it as I've never played them before, and I have always been attracted to playing 'moderns'.

It turned out that my game was the only game on Sunday and I had 4 eager players, Dave, Pete, Dickey and Tony. Nobody had played before so this was their first introduction in to space fighter combat.

After the battle of Hoth the rebels focused on improving their fighter capability. A prototype A wing escorted by 2 X wings is jumped by a 3 TIEs and a Tie Advanced. The A Wing needed to get away and the TIE's needed to get back with the new intel.

Me:
1 x A Wing Prototype 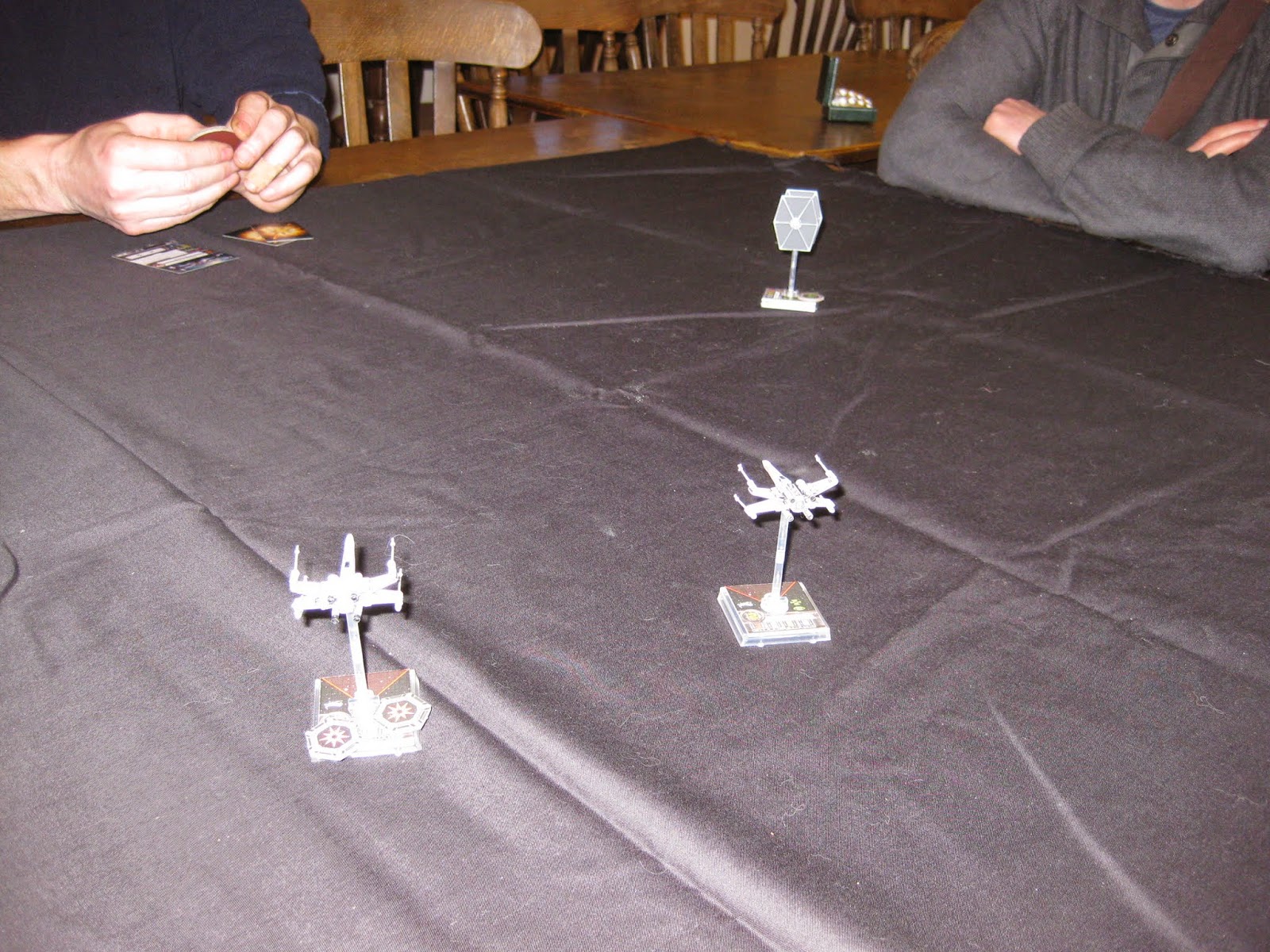 On points the Rebels won, on scenario objectives the Imperials won destroying the A Wing and getting away with the information. However so did the Rebels. The A Wing will be ready in time for the battle of Endor!

The game worked really well and the basics were thoroughly tested. Next I'll need to introduce add on's.

Everyone enjoyed themselves. There was talk of buying their own copies, and how to use the rules for squadrons. The Megalomaniacs job is done!
Posted by Grigork at 10:08 1 comment: