The chaps came round last night for a couple of games of X Wing each. Since we'd played scenario 1 last time and enjoyed escorting the diplomatic ship we thought we'd try the 2nd scenario. The scenario has Luke Skywalker, yes the man himself! hiding in an asteroid field having taken damage on a reconnaissance mission. He needs to escape and get the information to the rebels, the handicap being his ship is damaged and it will take 5 turns for R2D2 to fix it. Until fixed it could only fly move 1 or 2 maneuvers  In the mean time 2 Ties flown by Night Beast and Mauler are hunting him, each entering the board from opposite ends.

The board was 3ft by 3ft with the Imperials deploying first with range 1 of their table edges. Next it was Luke within range 3 of the Ties and within a 1ft zone across the middle of the board. The Imperial player then got to deploy 6 asteroids in this 1ft zone, no close than range 1 of Luke.

We all managed to play Luke and the Imperials once.

The first game set up missed an asteroid so only 5 were placed which didn't effect play. I was the Imperials and Chris played Luke. Chris had missed heard the objectives and thought he could only exit from 1 particular   Imperial game edge rather than either of them. This led to a dramatic flip round inches from safety all guns blazing. As a friendly game the error was pointed out which then led a series of tight turns to escape. Despite this error, and the damage I managed to inflict during this escapade Luke escaped.

The second game I was Luke playing Guy's Imperials. This time I missed the point of the deployment rules and placed Luke on the boards edge, 1ft from Imperial start edge. Guy wisely tried to block me in with the asteroids, but he had to deploy these  range 1 from the edge. This should have rung alarm bells and Luke in the position I'd placed him had a clear run to safety. In the excitement I forgot I needed to wait 5 moves before I could escape and we had to pause play and reduce my movements to move 1 rather than 2 as the Ties were no where near and by turn 3 I'd almost left the board which is an auto lose. In the end Guy got both Ties to shoot before I escaped, which I did with 1 hit left. A very close game all down to fantastic dice rather than a properly set out scenario.


The 3rd game Guy played Luke and Chris the Imperials.  Chris tried to block 1 escape rout with the asteroids, but Guy had sussed he could fly right up to them and then over/under them using them as cover. Guy picked Maulers edge as his escape route and concentrated all his fire on him while flying at him head on. The highlight of this game was when Chris desperately tries to get Guy's Luke in to Night Beast's sights misjudges a move a lands perilously close to a group of asteroids. Guy reminded Chris he could barrel roll rather than take an action, which was unusual as it's me who always forget Ties can make this move and Chris always reminds me. Anyway Guy and I waited for the roll to place Night Beast right behind Luke. There would be no escape. Night Beast however is focused on the asteroids and rolls the other way. Well our gentlemanly demeanor was lost and we collapsed in laughter. Some apologies to Chris and an explanation for our outrageous behavior we allowed Chris to move back to his original position and he took a focus point rather than a roll. Guy then blew up Mauler allowing Chris to bring on a replacement.


Chris Academy pilot was placed and both he and Night Beast over shot Guy's Luke who flew to safety on turn 5 flying behind them. 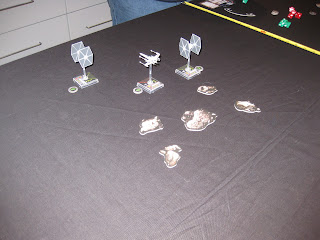 Well 3 games played and Luke escaped in each. I noticed none of us used target lock, but we did enjoy using player characters with their special characteristics like Maulers shooting skill and Luke's ability to down grade a critical hit. 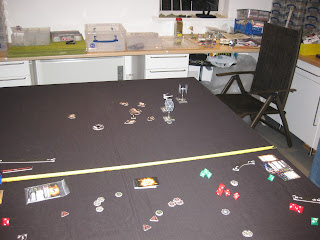 The rules are such fun. 3 games in 2 hours and time to chat. Brill.
Posted by Grigork at 22:42 No comments: